One could never complain that the Opus Theatre’s world series is not eclectic. On Saturday we heard Eastern European folk music from a Balkan group, Blato Zlato¸ who come from New Orleans and perform throughout the world. 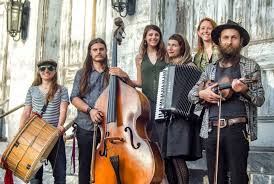 Their style is certainly demanding from the first moment. While they draw on a wide range of musical styles the core of their work is Bulgarian folk music and the intensity and power that that implies. Vocal lines are frequently hurled into the theatre and the accompaniment, including a large drum, is never less than assertive.

Blato Zlato were formed in 2015 and their first album was entitled Swamp Gold – the English translation of the group’s name. The items they sang for us were loosely described but in the main we were left to simply enjoy the virtuosity of the musicians. The group is made up of four women and two men, with three of the women providing all the vocal lines as well as the crucial accordion accompaniment, while the fourth woman plays the drum and the two men the fiddle and electric bass.

Within this potentially limited palette they create a wide range of musical impact, with extended improvisations from the fiddle and splendid solos for slapped bass. There were a number of a cappella items for the solo female voices which highlighted not only their amazing accuracy of tone but also the subtle differences of texture in their voices. As bagpipes are often used in Bulgarian folk music the instrumentalists were able to produce an effective drone for some of the songs.

The first half included the internationally famous Izlel e Delyo Haidutin, which was recorded for and included in the NASA Voyager flight in 1977, and later we heard their own composition Doncho I Stenata which was recently released as the second side of a single with the earlier song.

In addition to the Bulgarian numbers we heard music from Serbia and Georgia. It is this latter country which effectively brought them to Hastings, as it was there they met Oliver Poole, who invited them to be part of the world series – and a great asset they have proved to be.