Eastbourne-based classical guitarist Richard Bowen will be giving a recital at St Nicolas, Pevensey at 1pm on Thursday 26 July. He will play a selection of pieces by renowned Spanish composers Albeniz, Tarrega, Cardoso and Sor, as well as transcriptions of tunes originally composed by JS Bach for the lute and cello. There is no admission charge, but a retiring collection will be taken to contribute to the cost of maintaining the newly restored church building. Tea, coffee, wine and soft drinks will be available before the concert.

Churchwarden Simon Sargent commented “We are very pleased to welcome Richard Bowen to St Nicolas for our first guitar concert in recent years; the instrument should be well-suited to our excellent acoustics. We are also very grateful to Richard for generously offering to perform for the benefit of the church. Now that the building has been so beautifully restored, regular fundraising is essential to maintain it in good condition.” 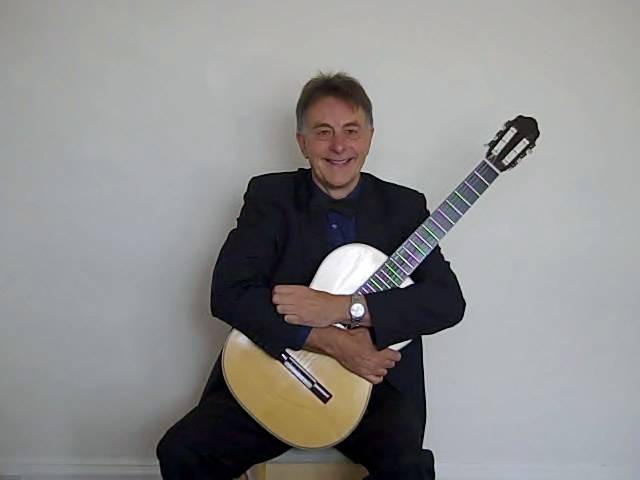 Richard Bowen gained an ATCL Performance Diploma at Trinity College of Music in London in 2010. He studied Classical Guitar with the internationally recognised Segovia prize-winner, Paul Gregory, and won two categories in the Brighton Competitive Music Festival on Classical Guitar in the late 1980s.

Prior to undertaking classical studies, Richard spent three years at the Leeds College of Music, studying Jazz Guitar. He has worked all over the world in this capacity, and has backed many famous faces. For two years, he was the guitarist with the Frankie Vaughan Orchestra. He has done sessions on guitar for BBC television, and for individual singers, and performed in West End shows.  He is also active on the local jazz scene.

Richard’s classical work has been mostly for local music societies and churches such as The Chapel Royal, Brighton, St Nicholas, Brighton, St Leonard’s Seaford, and St Mary’s Eastbourne, where he was a festival artist in 2016.

He also performs at hotels for various functions where classical guitar is required, such as the Randolph in Oxford, and the Grand Hotels in Eastbourne and Brighton.

The Lapwing Music Festival is a unique event celebrating its third year in 2018.
Four outstanding artists will perform in the magical setting of the Coastguard Cottages, Cuckmere Haven. This year we are expanding to a beautiful marquee with views of the cottages, the Cuckmere Valley and the cliffs of the Seven Sisters. Only 60 tickets are available for each of these incredibly intimate recitals. Profits will be donated to the Cuckmere Haven SOS campaign, which seeks to save the cottages from coastal erosion.

Lapwing has an established tradition of hosting renowned solo artists to present deeply personal recitals. Our line-up of performers this year is truly exceptional. Maya Youssef is a Syrian virtuoso instrumentalist, hailed as “the queen of the qanun”. Manu Delago is a unique and innovative performer specialising in the Swiss hang drum who appears regularly alongside Björk and Anoushka Shankar. Lea Desandre is an exquisite mezzo soprano in demand across Europe, and will be accompanied by Thomas Dunford, a “rockstar” of the lute, who will also present a concert of solo Bach from his latest album on the Alpha label.
The festival features an exclusive world-premiere screening of Manu Delago’s 30-minute film ‘Parasol Peak’, a delicious buffet lunch of local produce on Sunday with a guest speaker to-be-announced (2017’s guest speaker was David Dimbleby), and the chance to learn more about the environmental and historical significance of this stunning location from representatives of the Sussex Wildlife Trust and Cuckmere Haven SOS. We look forward to welcoming people to Cuckmere Haven to help save one of the iconic views of England.
Artists for 2018:
Maya Youssef – qanun – Friday, August 31 7:30pm
Manu Delago – hang drums – Saturday September 1, 3pm and 7:30pm
Lea Desandre (with Thomas Dunford) – mezzo soprano – Sunday September 2, 3:00pm
Thomas Dunford – lute – Sunday September 2, 7:30pm
Recital Tickets £40. All tickets include drinks and canapés.
Buffet Lunch £35 – Sunday September 2, 12:30pm, Guest Speaker TBA