The anniversary of the Suffrage movement has brought us some enthralling events, one of which was presented at Holy Trinity last week as part of the Lunchtime Concert series. 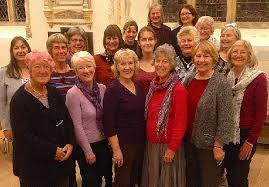 In the first half we heard recent compositions by Gwyneth Walker and Sarah Quartel. Gwyneth Walker’s setting of a mystical love poem I will be earth is effective even if the text is often elusive. Gifts from the Sea is a longer piece which drifts and meditates on a woman’s many roles in life.

The least successful of her settings is of Tennyson’s Crossing the Bar which tends to sentimentalise the poem, though it was persuasively sung.

Sarah Quartel’s song settings are more extrovert with a captivating Songbird and I Remember which could be straight out of a West End musical. We will hear more of Sarah Quartel’s work in the November concert.

The last three items proved to be far more exciting if only because a very large part of the audience joined the choir on stage for three suffrage pieces, opening with Dame Ethel Smyth’s March of the Women. Though her works suffered in the later part of the twentieth century she is beginning to be performed more widely, though we have yet to see a professional staging of The Wreckers.

The March was followed by the delightful Nana was a Suffragette – unaccompanied and decidedly impactful.

The concert concluded with Lucy Pankhurst’s setting of The Pankhurst Anthem but the assembled forces were persuaded to an encore with Rise Up Women – which we were all happy to endorse.

Debbie Warren conducted and gave the cheerful linking narration, and the choir were accompanied by Helen Ridout from the piano.