Two London symphonies make a neat thematic pairing although they don’t really have much in common. Haydn’s last symphony was composed in London for London audiences but it isn’t in any sense descriptive of the city. Vaughan Williams’s second, in contrast, is effectively symphonic programme music complete with those haunting, evocative Westminster chimes. Had I been programming I might have started the concert with Elgar’s Cockaigne Overture for another take on London but perhaps there was a length issue. 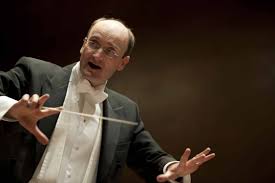 It’s interesting to watch baton-wielding, time-beating Andrew Manze, unshowy and looking like a city banker in dark suit and tie, at work three days after seeing the flamboyant Teodor Currentizis on the same rostrum. Classical music is a far broader church than people who don’t engage with it usually realise.

Manze gave us a thoughtfully punctuated slow D minor opening to the Haydn symphony reminding us that Haydn was already in Creation mode. Then came a lot of cleanly picked out Haydnesque inter-instrumental dialogue. The mellow bassoon work against the delicate string rhythms in the andante was delighful and Manze allowed all the wit – including those all important general pauses – to sing out in the scherzo with imaginative flexibility of tempi in the nocturne. I liked the decisive resonance he found for the fourth movement too.

I’m reminded of a remark made recently by the professional who conducts one of the amateur orchestras I play in. “If I could choose to have dinner with a composer” he said, while we were working on symphony 103, “It would have to be Haydn. You’d never be bored!” This performance helped to prove his point.

And so, after the interval, on to Ralph Vaughan Williams’s London symphony and the enlarged orchestra it calls for, including six percussionists kept busy, two harps and lots of additional brass. You need a lush string sound to bring off this symphony of many moods. Manze coaxed plenty of richness out of the Scottish Symphony orchestra with memorable solos from the leader, Laura Samuel and principal viola, Scott Dickinson. Violas were, unusually, to the right of the podium where cellos traditionally sit which added to the tonal balance rather effectively. I liked the very evocative dying away to nothing at the end of the third movement nocturne and the grandiloquence Manze found in the fourth before the peaceful beauty of the epilogue.

There’s been a lot of quite polarised discussion lately – on Radio 3, in newspapers and elsewhere – about applause between movements. I’m firmly in the “fuddy-duddy” camp and want all appreciation saved for the end of the work – which rarely happens these days especially at the Proms. For some reason, at this concert, there was no inter-movement clapping. Sudden corporate enlightenment? Well it was certainly a very welcome change anyway.

The Parkinsongsters brought us Songs for a Summer Eve on a delightfully warm evening, providing music we all knew and loved. The sixteen singers under their conductor Jane Metcalfe opened with Sumer is icomen in and bounced immediately into Spread a little happiness, before whisking us away to Venice for the Barcarolle from the Tales of Hoffmann. 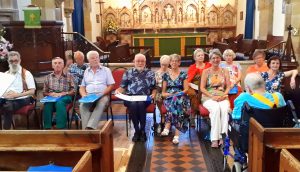 The first of a number of solos came from Bernard Crosby who encouraged us to join in And her mother came to which was followed by another familiar Ivor Novello song Rose of England. Having flirted their way through You are my honeysuckle the choir had a break while Karen McInally sang for us. I have to admit a personal interest here, as in my youth a lady at my church regularly sang Pale Hands I Loved but I don’t think I have heard it since. It is a wonderful Edwardian ballad and was given all the sentimentality it needs. However before this we had enjoyed There are fairies at the bottom of my garden – just to set the right tone!

A Colour Medley followed – too many tunes to list them all – but it included Silver threads among the gold from Ged Hitchman and Julie White. The final items included a gentle Summertime, a raucous Torna a Surriento, Bryan Skinner singing Drink to me only and all of us joining in Oom pah pah. There was just time before refreshments for a final chorus of Bring me sunshine, leaving us all wanting more and looking forward to next time.