Patience is a strange work even for G&S. Though there are two strong tenor parts there is no obvious tenor lead and the two would be poets via for our attention for most of the evening. As such it is ideal for an ensemble company such as Opera Anywhere who need to double up and ask us to draw on our own imaginations, with five love sick maidens rather than twenty! 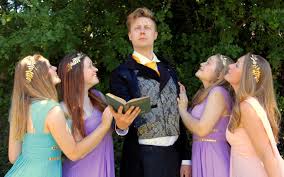 The key figure in the narrative is Patience herself and Jennifer Clark had a gentle naivety and a sweet voice absolutely right for the part. She may be out of her element where the aristocratic ladies are concerned but she has a strength of will and is not afraid to speak up for herself.

The two poets vying for her affection are equally strongly cast. David Jones’ Bunthorne is a young man almost out of his depth but concerned to keep up appearances – until he literally lets his hair down to reveal his true feelings to the audience. By contrast the narcissistic Grosvenor of Dale Harris seems far more content to stare at himself in the mirror that at anyone around him. Their final duet When I go out of doors was splendidly done, though it would take a lot more to convince me that Grosvenor has actually changed for the better at the end.

While the poets easily reflect nineteenth century aestheticism – and our understanding today of Oscar Wilde – the position of the Dragoon Guards is more complex. We don’t ‘read’ soldiers in quite the same way today, and their patronising expectations are more difficult to accept. Tristan Stocks’ Dunstable is finely sung but the part does not let him expand the character as he is able to do as Frederic or Nanki-Poo.  Mark Horner’s updating of the Colonel’s patter song was effective though the onset of bad weather (a literal deluge for the second half of the first act) did not help the text to carry.

Vanessa Woodward again takes on the thankless task of Gilbert’s aging females, in this case giving us a wonderfully believable (I was going to say filled-out but that might be misunderstood) Lady Jane. She might not have played the cello for us but at least, even with the small ensemble, there was a live cello on stage – thank you Rosie Burchett.

Sullivan’s score has many fine moments and it was the more heart-felt ones which really scored. Patience’s Love is a plaintive tale and the Mozartian duet Long years ago were both movingly sung.

Nia Williams was as usual guiding the score from the piano and was joined by flautist Nick Planas.

If you have not caught any of the G&S this year there is still time, with Pirates on punts yet to come and performances across the south of the country running up to late November with a final Patience at Lewes Little Theatre on 29th December.