If ever a concert proved that you don’t have to be a glitzty, glamorous visiting orchestra to produce something stunning, this one was it. The London Philharmonic Orchestra and Choir, under their Principal Guest Conductor Andres Orozco-Estrada, quite blew me (and most of the spellbound audience) away with this account of Verdi’s finest opera, sorry, Requiem. 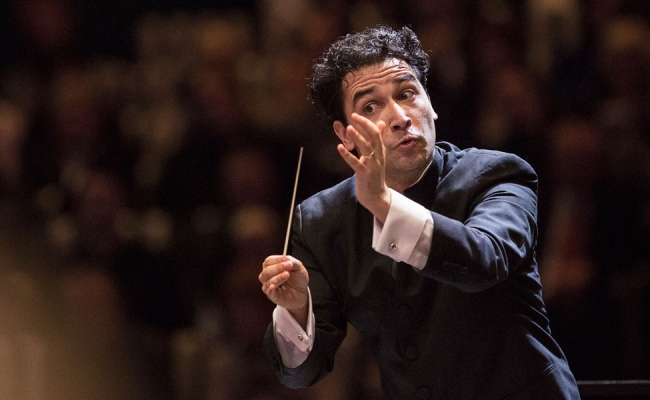 Logistically it isn’t easy in the Royal Albert Hall to stage a work of this magnitude. With two rows of choir on the tiers behind the orchestra and the rest in the lower rows of the designated choir stalls the furthest singers are a very long way from the conductor, who wisely took it all at a measured pace, focusing on musical detail rather than metronomic extremes to accommodate the time lag. Also potentially problematic was the distance between the sopranos and altos across the orchestra but if they were having difficulty hearing each other it didn’t show. And as for the poor tenors and basses standing within inches of the bass drum, they too seemed unfazed. All credit to them. I sang this work standing next to it once in the front row of the altos. Every time the percussionist hit her bass drum in the Dies Irae the vibrations left me literally senseless and unable to breathe or sing for the next three bars.

But Orozco-Estrada, who mouthes with the choir and supports his soloists (including mezzo, Sarah Connolly who stepped in at the last minute) very carefully, ensured that none of that mattered at all. And his focus on sensitive dynamics packed in all the drama Verdi wanted. His opening pianissimo introit was almost imperceptible in its softness. The later forces of the Dies Irae and Sanctus were rivetingly powerful. And I loved the radiant tuba mirum section which, at the performance included the intriguing cimbasso – a form of angled bass trombone.

Also beautifully milked for emotion and melody was the deliciously sensuous lacrymosa with soprano Lise Davidsen and Sarah Connolly in duet against the brass section. Their agnus dei was nicely balanced and sung too.

All four soloists did a good job but tenor Dmytro Popov was utterly outstanding. His Ingemiso section of the Dies Irae brought the sort of clarity and brightness which makes you sit bolt upright in your seat in astonishment and admiration.

The choir (chorus master: Neville Creed) rose to the challenge and did magnificently well too. At full pelt I should think they could be heard down by Harrods – with their excellent tuning and crisp timing, especially in Verdi’s glorious Sanctus.

And finally to that quivering, passionate Libera Me which Davidsen delivered with such intensity that the audience was completely stilled – and that is rare at the Proms. Bravo!