Continuing English National Opera’s long tradition of reimagining the operatic canon in daring new ways, the 2018/19 Season opens with a production of Richard Strauss’s Salome retelling the biblical tale from a radical feminine perspective. Acclaimed Australian director Adena Jacobs makes her UK debut with an all-female creative team, excavating the themes of violence, sexuality and power from Oscar Wilde’s story and presenting them in a shockingly contemporary light. Allison Cook, one of the UK’s most exciting interpreters of 20th century repertoire, makes her role debut as the titular princess.

This dreamlike journey through Salome’s psyche, evoked with powerful abstract visual images, shows a claustrophobic space in which female desire replicates the violence of the patriarchal world. ENO Music Director Martyn Brabbins takes the conductor’s baton in his third production as Music Director. 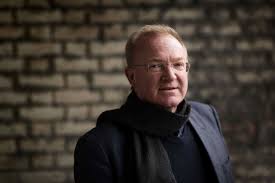 Adena Jacobs is the Artistic Director of acclaimed Melbourne-based theatre company Fraught Outfit, which seeks to stage classical and biblical stories from a feminine perspective. Previous adaptations have included The Bacchae (‘extraordinary, overwhelming theatre’ – ABC) and The Book of Exodus (‘gobsmacking, brilliant’– The Melbourne Critique). She was Resident Director at Belvoir in Sydney, 2014-15. She comments: “This production of Salome is mythic, feminine and brutally contemporary. Imagined through Salome’s perspective, Strauss’s opera becomes a fever dream, a dark fantasy, and an examination of patriarchal power and control. My approach to Salome is through the lens of trauma; the ways in which cycles of violence have inscribed themselves on to the bodies and psyches of these characters.”

Martyn Brabbins has emerged as one of the country’s leading conductors. In this, the first season he has fully programmed alongside Artistic Director Daniel Kramer, he will also conduct two more pieces, War Requiem and the world premiere of Iain Bell’s Jack the Ripper: The Women of Whitechapel.

Scottish mezzo-soprano Allison Cook, widely acclaimed for her ‘tour-de-force’ (Opera Magazine) performance as the Duchess of Argyll in the 2013 New York City Opera production of Powder Her Face and in the title role as Britten’s Phaedra at the Barbican, makes her ENO debut as well as her role debut in this production.

English bass David Soar sings the prophet Jokanaan, returning to ENO after singing his ‘first-rate’ (The Daily Telegraph) Animal Tamer and Athlete in 2016’sLulu. He also returns to ENO to sing Colline in La bohème later in the autumn. Northern Irish tenor Michael Colvin, previously seen at the Coliseum as the Painter in Lulu and as Bob Boles 2014’s Peter Grimes, sings Herod.

One of ENO’s most admired artists, Susan Bickley, sings Herodias, wife of Herod. Called ‘one of the greatest singers of our time’ (The Spectator), she has been seen on the ENO stage many times, most recently as Paulina in 2017’s premiere of The Winter’s Tale and as Eduige in Rodelinda, also in 2017. British tenor and former Glyndebourne Young Artist Stuart Jackson makes his house debut as Narraboth.

Mezzo-soprano Clare Presland sings Herodias’s page, having given a ‘beautifully considered’ (WhatsonStage) Hermia earlier in 2018 in A Midsummer Night’s Dream.

The Jews, Soldiers, and Nazarenes ensemble includes members of the award-winning ENO Chorus, continuing an ENO practice of featuring Chorus members in principal roles from the Studio Live programme. The cast is completed by Trevor Bowes as the Cappadocian and Ceferina Penny in her house debut as the Slave.

Multi-award-winning designer Marg Horwell makes her UK debut after a much-lauded career in Australian opera and theatre. Lighting design is by Lucy Carter, whose many awards and plaudits for work including Oil at the Almeida Theatre (2016) and ENO’s own The Dream of Gerontius at the Southbank Centre (2017) have made her one of London’s most sought-after lighting designers. Australian choreographer Melanie Lane completes this all-female creative team.

‘It’s just paper and ink – but it can reach into your heart and grab it’. Hastings first Litfest crammed thirty two events into little more than two days – so many that even an enthusiast like myself could cover nowhere near all that was on offer. Here we will concentrate on those at the Opus Theatre which proved a remarkably responsive venue for single presentations and larger theatrical events.

The opening quotation came from Kathryn Evans at the discussion by authors Writing for Children and Young Adults on Saturday morning. It took up the ideas raised by Sir David Hare, the Festival Patron, the day before. He was remarkably honest about his time in St Leonards and Bexhill, places he could not wait to leave, but the sense of isolation it brought also encouraged him to read intensively and subsequently to be a writer. He accepted that he had avoided the South Coast for most of his life but had recently, with an invitation to write about the South Downs and subsequently Glyndebourne, come to appreciate what Sussex has to offer, and is genuinely enthusiastic about this, the first of what is hoped to be many Hastings Litfests. It felt, he said, like a homecoming. 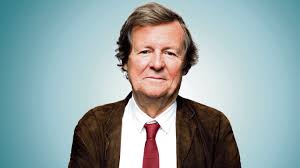 The complexity of emotions which writing raises for any individual was perfectly reflected in the choice of David Hare’s verse which was read by Julian Sands. Where his plays always have an intermediary – as with most art forms be they opera, concerts, or exhibitions – verse is intensely private and his poetry has only, so far, been published for private distribution. Many of his poems are dedicated to and reflect on his long term relationship with his wife Nicole Farhi. They are so personal that at times we seemed to be intruding.

This theme was taken up again by the panel of five authors writing books for children and young adults. Led by Sunday Times journalist Nicolette Jones they discussed their own reading as children and the influences upon them. The scope of writing for children is vast and it became clear as the session progressed that all of them valued the breadth of vision they can bring to children’s books which are often more limited within the rigid categories for adult fiction. Deeper philosophical points were raised when questions of identity came to light ‘who am I? How do I know who I am?’ and all concerned agreed that writing for young adults often gives them a freer hand than might be the case with adult fiction.

In the afternoon Sophie Hannah provided a highly entertaining introduction to her work writing continuation stories for Agatha Christie’s Hercule Poirot. There seemed to be a rather uncomfortable interface between the creative challenge of a new story fitting the Poirot / Christie model and the families desire to sell ever more Agatha Christie novels to a new generation who prefer to be on their phones rather than reading books. On the more positive side we can look forward to a first Murder Mystery Musical at next year’s Litfest.

The evening’s entertainment took us very clearly away from our phones. The Pantaloons have a strong reputation for working closely with their audiences even if it is (often necessarily) at the expense of the original text. Their version of The Importance of Being Earnest, with just four actors, is hilarious and gloriously entertaining. It draws on the assumption that most of the audience know the play very well long before they arrive, and that we can all join in with a hand-bag!!! Moreover they add in musical numbers which are entirely apt to the approach as a whole, and remarkably well sung and played. In the long run the approach stays faithful to the original and simply brings an old war-horse comfortably into the twenty-first century. Jennifer Healy gives us a sexily overt Fenella Fielding as Gwendolen and a Miss Prysm such as none of us have ever previously encountered – or would want to. Alex Hargreaves as Jack/Earnest is almost the most normal of the cast but has fine moments of eccentricity. Fiona McGarvey brings us a Lady Bracknell which would make Dame Judi blush, while Neil Jennings holds the whole thing together with an Algernon who appears to be normal – if totally untrustworthy. The performance was obviously couched for out-doors but worked well within the spaces of the Opus Theatre. Let us hope The Pantaloons are encouraged to return soon.

The festival spread it wings to the White Rock, the Electric Palace Theatre, the Horse and Groom, the Kino Teatr, with workshops at the Stade Hall, Archers Lodge and The Stables Theatre, with the concluding events in the Royal Victoria Hotel.

Generous thanks to the many volunteers, without whom none of the events would have happened and to the organisers of what we firmly hope will become a fixture in the cultural life of Hastings.

Not quite the end of summer but the evening cooled rapidly and by the final chorus it was quite dark in Scotney Castle grounds. Not that this dampened the spirits, either of those in the audience or the spirits on stage. 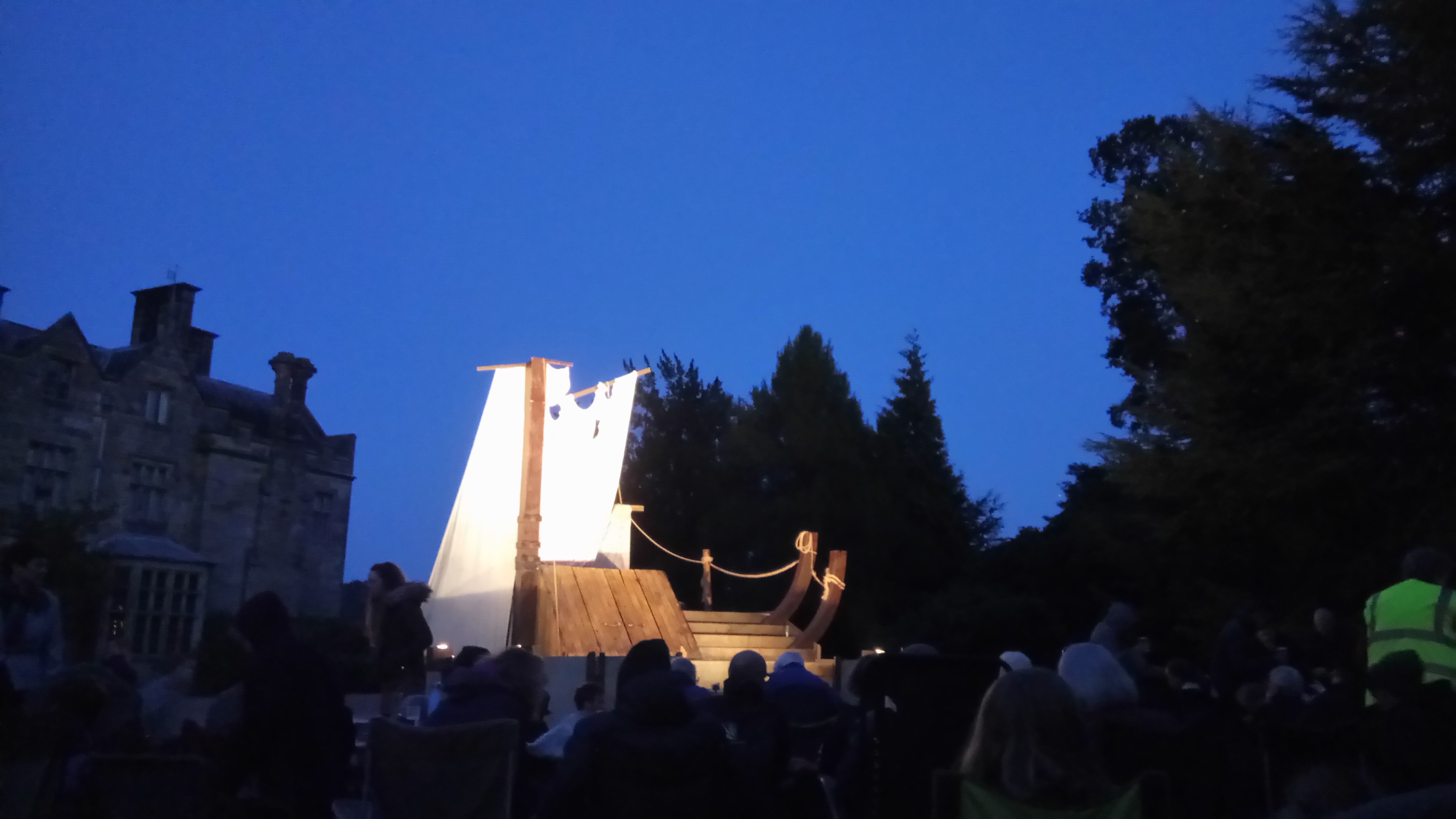 The Lord Chamberlain’s Men make a virtue of not only playing with a handful of actors but working outdoors without any amplification. Where the Globe has an inbuilt acoustic, the lawns at Scotney don’t and the cast have to throw their voices with considerable skill to be heard, which they are throughout. Moreover, the small ensemble means that most of the cast are on stage for most of the time, with only Danann McAleer’s Prospero – an unusual approach, emotional anxiety leading to heavily staccato phrasing –  taking a single part. That the outcome is so convincing is down to the clarity with which the text and story line are conveyed and the accuracy of characterisation even within triple castings.

Added to this the music – a cappella throughout – is always apt and supportive to the narrative situation. In this, William Pennington’s Ariel is superbly cast, being able to physicalise the verse as well as sing and play the whistle with effective skill.

Simon Jenkins’ Miranda – the only female character in the play – is touching and gently naïve without ever seeming to overplay the femininity, a tribute not only to his acting but the writing given that the part was originally played for a young man.

Morgan Brind’s setting works well with its decaying ship and rapid changes of level, allowing the cast to relate to each other in a wide range of positions within a very small set. Peter Stickney’s direction keeps the play moving swiftly but has ensured the text makes the primary impact not unnecessary stage business.

This was the last performance this season in England as the company is off to France and Germany.

Hopefully they will be back again soon.