Brian sadly died on 30th May 2021. It is difficult to summarise such a full and active life as his. Here is a little about him. 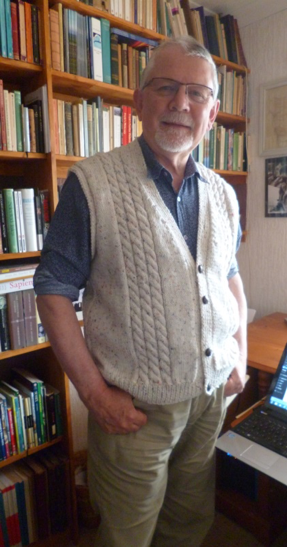 Brian was born in Shrewsbury in 1945, but the family soon moved to Fulham where he lived until he married Sally in 1966 and went to live in Camden Town. Then he was working in the BBC Music Department near Broadcasting House, and soon after starting with the BBC commenced an Hons English Degree at Birkbeck College which led to post-graduate training as a Director at The Drama Centre. He worked briefly in the theatre and then moved to Redhill and taught drama. He says, “The two essential professional strands of my lengthy career evolve at this point. In Education I taught drama and English, while running numerous drama and music groups. I ran the local Arts Festival and was invited to write as arts correspondent for the Surrey Mirror”.

In 1980 the family moved to Hastings. Brian held a number of senior educational posts, while becoming increasingly involved working with Special Education Needs Students – a field only just opening up in its own right. After work based in particular schools he started a long association with Russell Education Trust as their Senior Special Needs Consultant, travelling widely, covering schools across the South of England and into South Wales.

In Hastings he met up with Denby Richards, Editor of the oldest international music magazine Musical Opinion. He started to write regularly for the magazine and was soon acting as Deputy Editor. In 1992 he was invited to become Editor of The Organ which he happily took on – significantly updating and broadening the scope of the publication. He remained Editor for 15 years and then became Editor Emeritus.

With a local group of interested musicians, led by Denby Richards, he helped run the early St Leonards Arts Festival. He was invited to become a member of the Critics Circle – “I had waited many years for this and it was a real honour as they invite you, and you have no idea who has proposed you”.

He was involved in Glyndbourne’s community Opera on the Pier and was also invited to direct and conduct with different local groups on a fairly regular basis. This included working with BLODS in Bexhill and directing the world premiere of Kenneth Roberts Quel weekend for Hastings Opera (now Opera SouthEast). He directed a number of plays for the Stables Theatre, and formed a small company to set up an open-air summer theatre at Batemans.

He has written intermittently for Hastings Observer over the years and recently, during the time of Covid wrote a weekly column which was well read and appreciated by many. In it he talked about the frustrations and difficulties for musicians but also some of the pleasures and creativity to be found online. He also featured many reminiscences of past musical experiences.

He founded Lark Reviews website in 2012. It has grown to be well used as a source of information and a promotional tool by individuals and groups with the more local 1066 sections as well as covering a diverse range of musical activity in other parts of the country   and now also online. CD and occasional DVD reviews also appear regularly with releases from many of the major producers as well as some produced on a smaller scale.

Brian wrote and published a number of books – including the detailed rebuilding of the 1763 Hastings Snetzler organ, a three volume survey of all the Organs of 1066 Country, and the biography of Edward Wyon, architect and poet who built and designed St John’s Hollington. There is also a range of personal publications A Lark on …..which are essentially autobiographical poems. He had a number of poems featured in Wild Goose Publications from the Iona Community.

He was involved in a number of organisations, musical and otherwise. He was for a number of years a trustee of the Seaview Project, working with homeless and other vulnerable people in St Leonards. Brian would often speak to other organisations about the work of Seaview. He was more recently invited to become a trustee of the newly organised Hastings Philharmonic Orchestra. Locally he was a particular champion of the Hastings Philharmonic Choir, Hastings Sinfonia and the Opus Theatre. He was also connected with Garsington Opera, English National Opera and the Oxford Lieder Festival.

He championed the restoration of the Snetzler organ in Hastings Unitarian church and was very supportive of young organists beginning a professional career. One of these, Tom Bell, now a successful concert organist and teacher for the Royal College of Organists writes this,

Brian was a lovely man with a refreshingly broad interest in and love of music. I first met him in connection with a recital I was awarded as a teenager, in the 1999 Three Choirs Festival (in Worcester). Five young organists were invited to give recitals during the festival, following a Royal College of Organists event earlier that year. Brian featured all five performers, and some reflections on their programmes, in The Organ. This was wonderfully kind, encouraging, and the reviews themselves were pitched just right given the age of the performers. Since that time my meetings with Brian have usually been in connection with recitals at All Saints Hastings, where I have played several times. It was also a very great pleasure to perform at Hastings Unitarian Chapel at Brian’s behest, both before and after the little Snetzler organ there was restored. Brian invited me to give those concerts when I was a student and it was a real thrill to reopen a restored historic organ. I am grateful to Brian for that opportunity and for plenty of other encouragement over the years.

We send our love to Sally and the family at this time and are thankful for Brian and his many legacies.