How should one pitch Cosi? Given the vast range of approaches, starting with a tennis match in the early 1930s is as good as any. All the more so if this is carried through with some sense of style and a precise concentration on accents, cut glass and otherwise. The problem arises when one comes to consider how seriously we should take the events and the characters themselves. 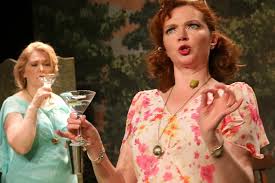 In Sarah Helsby Hughes’ production comedy is the key and there is a tendency to skate over the emotional problems this may throw up. If anything the girls fall back on alcohol to excuse both their conduct and their changes of affection. Serenna Wagner’s Dorabella is gently over the top in smanie implacabile while Sarah Helsby Hughes’s Fiordiligi is upstaged in come scoglio by the arrival of afternoon tea. Their cut glass accents are maintained to the end, though it is difficult to accept two such upper crust young ladies giving house room to Yorkshire navies. For once, the appearance of two East European strangers might have made more sense.

David Jones gives us a suave Guglielmo who is very much at the mercy of Don Alfonso. This is one of the most curious reinterpretations of the score. If Don Alfonso is a valet, why does he seem to have so much power and is able to be so outspoken? There might be a case for making him Jeeves – underplaying his wit and insight while all those around him make fools of themselves – but this is not the way he is played. Neil Balfour sings Don Alfonso with aplomb but never quite seems in control of the situation. On the night, Nicholas Sales as Ferrando was indisposed and so his part was sung, off-stage, by Joseph Buckmaster. This was far less obtrusive than one might expect as the event used microphones for all concerned and so we had little idea where the sound was coming from except from the nearest speaker. It was a pity that the PA system seemed to have a mind of its own and arias broke down mid-way only to return just before the end. Fortunately I was close enough to hear the direct sound as well as the electronic.

Heather Heighways’ Despina was certainly one of the most convening characters of the evening. Her diction was impeccable and she made much of the new translation. Looking at the transformed suitors she notes ‘I’d rather snog my granddad’ which seemed totally in keeping, as did the transition of chocolate into martinis. 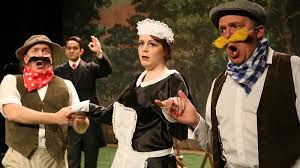 The small orchestral ensemble gave us a perfectly acceptable cut-down version of the score, though Benjamin Cox could have put a bit more pace into the opening scenes. Later events were better paced and the outcome convincing both musically and dramatically.

If soave il vento was the musical highlight of the whole performance, it could hardly fail as it gently floated into the late evening sky.

Bayham Abbey opera is always a date to put in the diary and we look forward to next year.