The Marlowe Theatre Canterbury is a rare venue in that it seems to work acoustically and visually for every genre: “straight” drama, musical theatre, orchestral concerts – and opera. This elegant, intelligent production of La Traviata sits as well in this space as if it were designed for it. In fact, this is but one stop on a big tour in Glyndebourne’s fiftieth year of touring. 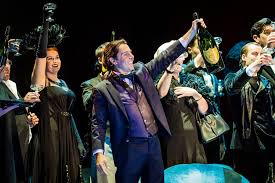 In the pit are 56 musicians – just visible from the circle –  supporting, accompanying and intensifying the action but never overwhelming it. From those opening mysterious pianissimo tremolo chromatics, repeated at the beginning of Act 3, Christoph Alstaedt  uses colourful dynamics and exquisite control to highlight the drama. There’s a gauze screen, behind which we can see Violetta’s bed as the lights gradually come up during the overture. It’s a strong directorial (Tom Cairns) idea.

Mane Galoyan gives us a restrained but charismatic Violetta in Act One. She is, after all, terminally ill, as well as the life and soul of her big party. She and Luis Gomes as Alfredo stroke the perfect harmonies in their first duet so that we feel and engage with every note. Later she brings all the passion and warmth the role needs and I loved the symbolism of everyone leaving silently from the stage a few bars before the end so that Violetta dies alone – as we all must.

Luis Gomes matches her well and is convincing in his love and there’s a stonkingly good performance from Noel Bouley as Alfredo’s interfering, later remorseful father. The work in Act 2 Scene 1 when he confronts Violetta is as chillingly touching as I’ve ever seen it.

There’s nicely directed chorus work and some fine choral singing (chorus master: Nicholas Jenkins) although it’s a strangely misguided decision not to have them back for a curtain call at the end. It was as if they’d been sent home for an early night. They deserve the credit they’re not granted.

But the real hero of the evening is, of course, Verdi with his dancing melodies and gut-wrenching constructions such as the near perfect quintet in Act 3 which, in this production, is deeply moving. And what wonders he weaves with his much favoured triple time. Of course he uses it for lilting dances, drinking songs and set pieces but he also makes it work for some very solemn moments of high emotion and Altstaed’s attention to detail made me notice it more attentively than ever in this production. No wonder old Guiseppe’s work has been so popular for so long.