The festival may be reduced in size this year because of the ongoing problems with Covid19, but thankfully it has not affected either the quality of the performances Jane Gordon is able to bring to the town or the enthusiasm of the audiences. Where some venues look strained with social distancing, the Kino Teatr simply looked as though it was comfortably full for a matinee. 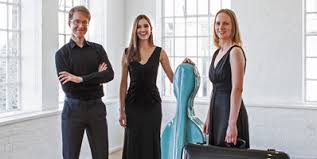 I was there to hear the Rautio Piano Trio playing Mozart and Faure. Mozart’s G major Trio K 564 is a late work, written at the same time as the three last symphonies, though they have little in common. There is a charm and naivety to the Trio which belies Mozart’s emotional state at the time it was written. The dominance of the piano, particularly in the opening movement, gives credence to the idea that the work was adapted from a piano sonata, but it’s none the worse for that. The opening Allegro is lively and, for one who was coming back to live music after seven months, sounded remarkably loud! The theme and variations of the second movement seems to die out suddenly, as if Mozart had had enough of it, before turning to the wonderfully child-like melody of the finale.

The second work was Faure’s D minor Trio Op120. Written when the composer was in his seventies, it is an indulgent work which asks us to trust and literally go with the flow. There is a sense of urgency in the opening movement but it is unclear where it is heading with its constant fluidity and changes of pulse. This restlessness continues in the slow movement which has occasional flowerings of melody, though they don’t last and the darker edges creep back in. The final Presto is skittish and often introspective with many dynamic changes throughout. This may have seemed an odd choice for an early music festival but the contrast with the Mozart was very telling.

The trio ended with a brief but highly evocative Tango to send us on our way. The Rautio Piano Trio – Jane Gordon, violin, Victoria Simonsen, cello and Jan Rautio, piano – record for Resonus Classics www.resonusclassics.com and the Mozart trio is currently available.