The Orchestra of the Age of Enlightenment (OAE) has a new home. It is now based  at  Acland Burghley comprehensive school  (ABS) in Camden.  Three offices will be adapted for the administration team, alongside a recording studio and library. The Grade II listed school assembly hall will be used as a rehearsal space, with plans to refurbish it under the school’s ‘A Theatre for All’ project, so for the first time, all elements of the OAE will be in the same place: players, staff and library.’ 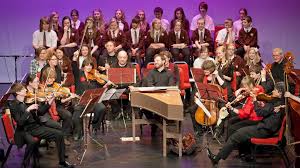 It’s been quite a journey since 1986 when a group of musicians decided to tear up the rule book and reinvent what we mean by “an orchestra” by going back to basics. That means “period instruments” or replicas of them  and they were at the forefront of the original instruments movement which has gained so much momentum in the last 30 years. OAE players switch instruments according to the music they’re playing. This might mean for example, one violin or flute for Bach or Vivaldi and a different one for Brahms or Bruckner and all the challenges of  sheep gut strings and horns without valves. It’s a case of using historical knowledge to make the music sound fresh, immediate and exciting.

William Christie is OAE’s current director although the idea of an omniscient conductor or “maestro” is a concept which developed during the nineteenth century. OAE often plays without a conductor as a lot of their repertoire would have been performed in the eighteenth century and before.

The  new residency – a first for a British orchestra – will allow the OAE’s musicians to live, work and play amongst the students of the school. The move is supported by a leadership grant of £120,000 from The Linbury Trust, one of the Sainsbury Family Charitable Trusts. It  facilitates the move to the school and underwrites the first three years of education work.

Crispin Woodhead, OAE chief executive explains: “Our accommodation at Kings Place was coming to an agreed end and we needed to find a new home. We already had a strong relationship with many schools in Camden through our education programme and our appeal hit the desk of Kat Miller, director of operations at Acland Burghley School. She was working on ways to expand the school’s revenue from its resources and recognised that their excellent school hall might be somewhere we could rehearse.”

Nicholas John, Acland Burghley’s Headteacher confirms:  “This partnership is much broader than simply music education.  Its reach will be measurable in other areas including physics and mathematics, and supports our new school mission ‘Creating Excellence Together’. The orchestra will very much be a part of the everyday school community, where students will be offered workshops and assemblies.”

The school won’t just be OAE’s landlord or physical home, however. The arrangement will offer the opportunity to build on twenty years of work in the borough through OAE’s long-standing partnership with Camden Music.  Having already worked in eighteen of the local primary schools that feed into ABS, the plan is to support music and arts across the school and in the wider community.  This new move underpins the OAE’s core ‘enlightenment’ mission of reaching as wide an audience as possible.

A similar project was undertaken in 2015 in Bremen, Germany. The Deutsche Kammerphilharmonie moved into a local comprehensive school in a deprived area and the results were described as “transformational”, with improved academic performance, language skills, mental health and IQ scores; reputational benefits; greater interest in and engagement with music among pupils; strengthened links between school, orchestra and community; and even, according to some of the musicians who took part, an improvement in the Kammerphilharmonie’s playing.

Violinist Margaret Faultless, who leads OAE, said: “As classical musicians, it can often feel as if we exist in a bubble. I think I can speak for the whole Orchestra when I say that we’re all looking forward to this new adventure. We are all used to meeting with people from outside the classical music world of course, but the value of our new project lies in the long-term work we’ll be doing at the school and the relationship that will hopefully develop between the students, their parents and teachers and the orchestra. The members of the Bremen Kammerphilharmonie said their experience actually improved them as an orchestra and I think the same will happen to us over the next five or so years, and it will remind all of us of the reasons we make music, which are sometimes easy to forget, especially in our strange and troubled times.”