The South Downs Summer Music Festival may have had to be cancelled like so many other events this summer but St Andrew’s Church in Alfriston welcomed a live concert with a reduced, socially distanced, audience in September. The concert was recorded live and was broadcast on their new website on Sunday 8th November.

It was given by the Benyounes Quartet, who were joined by Rebecca Jones viola, Reinoud Ford cello in Brahms Sextet no.2 in G major op.36. 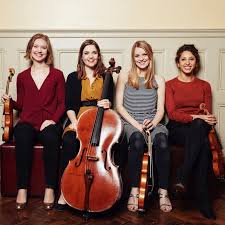 The concert opened with Mendelssohn’s String Quartet in E flat major op.12. Though the key might suggest a sunny work, the first movement has a lot of darker moments in the scoring, and many times of genuine reflection. The second movement brings a bright cantabile-like melody with a central section straight out of the Dream. The final movement brings energy and a lively rhythmic bounce. The acoustic in St Andrew’s certainly helped the balance and warmth of the strings.

The Brahms may be a more overtly romantic work but it also showed some Mendelssohnian lightness and fluidity, particularly in the final movement.

The opening movement has the weight of a string orchestra, with particularly strong writing for the first cello. The scherzo has a fierce dance at its heart before the meandering lines of the slow movement.

This was a finely balanced event – just a pity not more people were able to enjoy it live. Hopefully next year we will be back to normal.