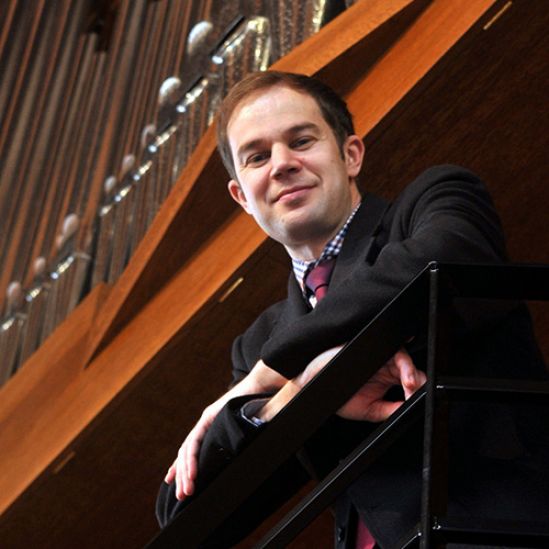 Simon Bell has contributed to this series a number of times over the years. As on previous occasions he demonstrated fine musicianship and delivered a very enjoyable, well structured and stimulating programme, particularly welcome for containing a good cross section of representative but lesser known organ repertoire.

Beginning with the German baroque we heard the lesser known Nicolaus Bruhns’ Praeludium in G coupled with two pieces by JS Bach- the technically sophisticated Vater unser im Himmelreich and the more playful Trio in G BWV 1027a. A beautifully registered Cantabile by Cesar Franck transported us to 19th Century Paris. We were then immersed in music by two notable figures from the English cathedral tradition from the late 19th/ early 20th Century. Bairstow’s Scherzo in A flat was a more substantial piece than the title might imply. Alcock’s Marche Triomphale was well placed at the end of the first half, a rousing and entertaining piece demanding lots of energy from the performer in this suitably spirited rendition.

The second half was given over to a single work. Guilmant’s Sonata VIII in A major is the last sonata from this prolific composer for the organ. The five movements contained much thematic and harmonic interest and gave Simon plenty of scope to show off many different tonal combinations, often brought about by very rapid and brilliantly executed stop and manual changes.

Vaughan Williams’ Rhosymedre provided a suitably contrasting relaxing encore following on from the full and frenetic sounds of the final movement.

I have said to many people over the years that Simon Bell is one of my favourite performers. I admire greatly his controlled technique and his ability to master the console with such accuracy and apparent ease. His programming and careful exploitation of the features of this particular instrument always make for a very satisfying listening experience. I hope we shall see him again.

Details of the remaining concerts can be found at