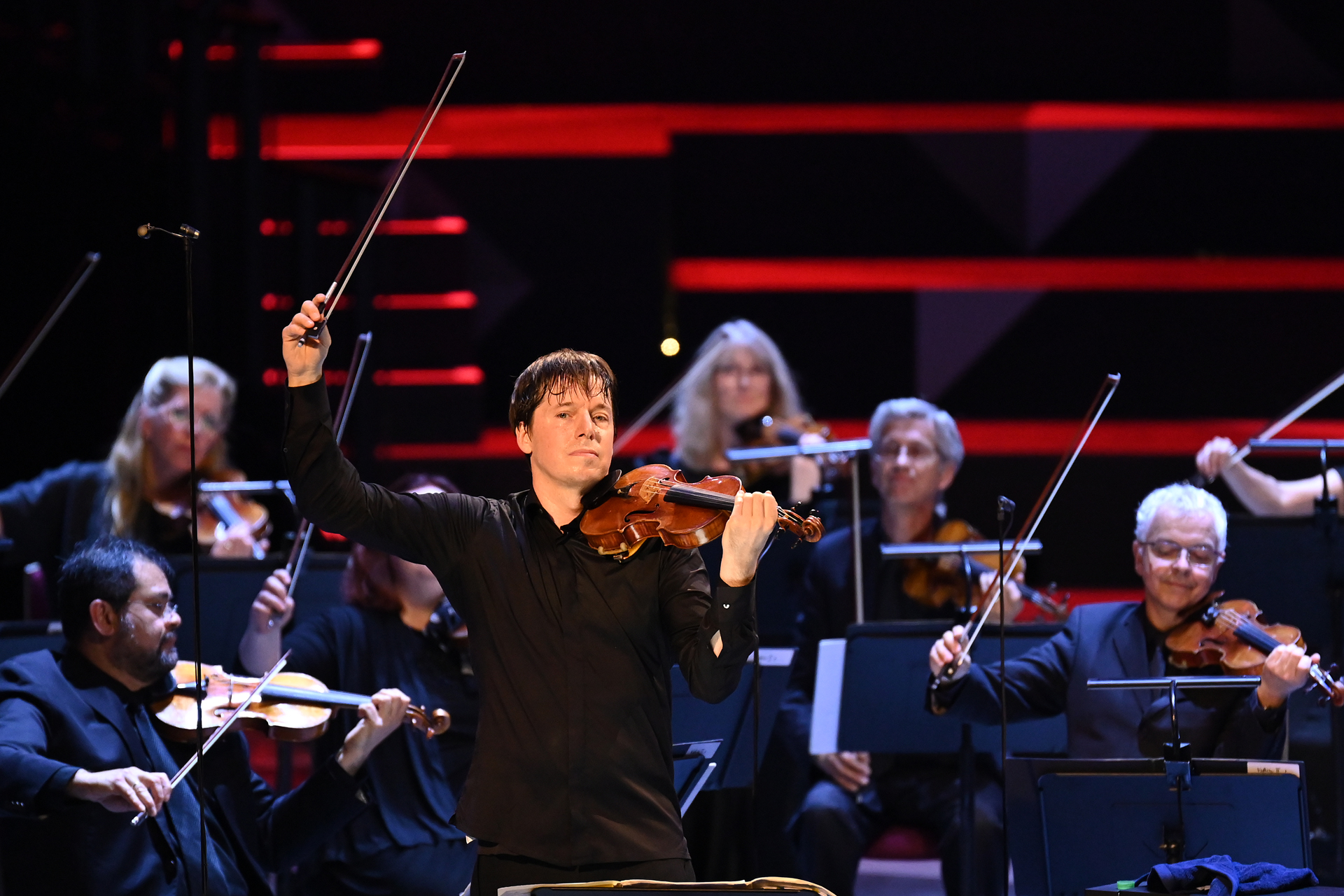 It’s a bold idea to intersperse Vivaldi’s early eighteenth century Italian take on the seasons with Piazzolla’s twentieth century Argentinian one. It makes you listen to, and hear both, with new ears. I rather liked it but I suspect it is a bit of a Marmite concept – especially as the four Vivaldi concerti were played in a very sparky, un-Baroque way – modern instruments, with a fair bit of vibrato, less cross string work than usual and percussive effects.

Joshua Bell’s interpretation of all eight pieces is far more collaborative than directorial. In the opening Vivaldi concerto (E major, La Primavera), for example, we heard some immaculately pointed duet and trio work with harpsichord, cello, violas and violin in an account which soared (and sawed) along with warm energy.

And – now transported to the sultry world of tango – I loved the mysteriousness of the gorgeous glissandi in the Piazzolla Summer in Buenos Aires and the glistening charisma of the cello solo (Caroline Dale) in Winter in Buenos Aires punctuated by Bell with, stroked-in off-beat harmonic notes. There was some fearsome playing in Piazzolla’s Spring in Buonos Aires too – a hot, full blooded sound with cat-like upward slides, col legno and bowing above the bridge for manic effect.

Joshua Bell has been Music Director of Academy of St Martin in the Fields since 2011 having worked with them since 1986. He clearly enjoys a warm relationship with the orchestra and told the audience at the end (before the encore – Gershwin’s Summertime arranged as a schmaltzy mini violin concerto) that he was deeply moved to be back with them after eighteen months of enforced deprivation. He wears his 53 years lightly, thick dark hair bouncing energetically in rhythm with his apparently rubber knees. It always seems awkward to me when a soloist leads from the front facing the audience because there are, perforce, lots of over-shoulder glances but it’s clearly an accustomed – and effective – way of working for these players.

The two works were presented as an interval-free single piece running 75 minutes in eight sections, alternating between Vivaldi and Piazzolla from the former’s Spring to the latter’s – and from the elegant natural sounds and colours of Italy three hundred years ago to the garish, noisy street life of South America much more recently It is widely thought that Piazzolla was inspired by Vivaldi and this performance leant heavily on the connection – with references in the music. In a concert which is not short of chuckles (the Pachelbel moment, for instance) there’s a good, almost Haydnesque, joke at the very end too. I won’t spoil it here – it’s available on BBC sounds for a month.

The Royal Albert Hall was fuller for this concert than I’ve seen it so far this season. Hurrah. We really are gradually getting back to normal.