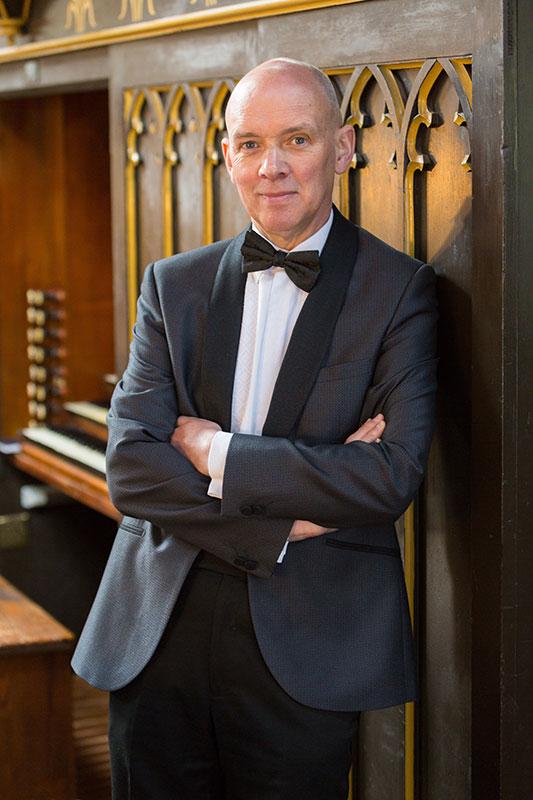 And so this year’s season of organ concerts came full circle rounded off in spectacular style by an organist who has become a regular feature and staunch supporter of this annual musical festival. Gordon Stewart brought his customary flair and expertise to present a number of works from different eras and traditions which highlighted the versatility and beauty of the wonderful “Father” Willis organ.

Opening with the Victorian Town Hall splendour of Hollins’ Concert Overture in C minor we knew we were in for another fine evening’s entertainment. Flute stops were to the fore in A Maggot – an 18th Century work by Thomas Arne in this popular later arrangement (including pedals) by Harry Wall. Mendelssohn’s championing of the music of JS Bach was reflected in the three contrasting works which brought the first half to a close – his Theme and Variations in D followed by Bach’s Trio on Herr Jesu Christ and Fugue in E flat (often known as “St Anne”).

Throughout the first half Gordon had conjured many different colours from the organ, with his careful selection of stops and use of the various divisions. This continued in the second half where some lighter items were also to be found alongside more classical and romantic repertoire. Noel Rawsthorne’s arrangement of Schubert’s popular Marche Militaire provided a suitably rallying opening number. This was followed by Pierne’s Trois Pieces – the Cantilene being a particularly haunting piece.

Providing a complete contrast, Prelude on Faithfulness by Dan Millar is a quiet reworking of the familiar hymn Great is Thy Faithfulness. We were treated to a particularly sensitive rendition as Mr Stewart expertly brought subtle shades of American gospel and theatre organ out of the depths of this English Victorian instrument, helped in no small part by careful use of the recently re-constructed tremulant. Staying in lighter vein but of a more upbeat English variety Goss-Custard’s Chelsea Fayre is a classical pastiche which works so well. This was a very nice piece of programming, highlighting the links with this composer’s family to the local area and connecting with pieces included in this performer’s opening concert in this year’s series.

It is not unusual to end a concert with a Toccata but it is rare to hear one in such a context that is completely unfamiliar. Composer F de la Tombelle and this work were both unfamiliar to me. As was explained, this piece bears more than a passing resemblance to the well-loved Toccata by Dubois but there was much of interest – and surprise – to be heard here.

The performance provided a suitably grand and virtuosic climax to another superb programme which was topped off by a lovely reflective Prelude on Annie Laurie written recently for the performer by Simon Lole.

Thanks were expressed throughout the evening to many people involved in the organisation of these concerts. Congratulations to all concerned for another highly successful series. Once again it has been demonstrated that there is a good audience for organ music of all kinds and that we have instruments in this area which are worth preserving and promoting. I look forward to the next series in 2022. Make sure to be there!