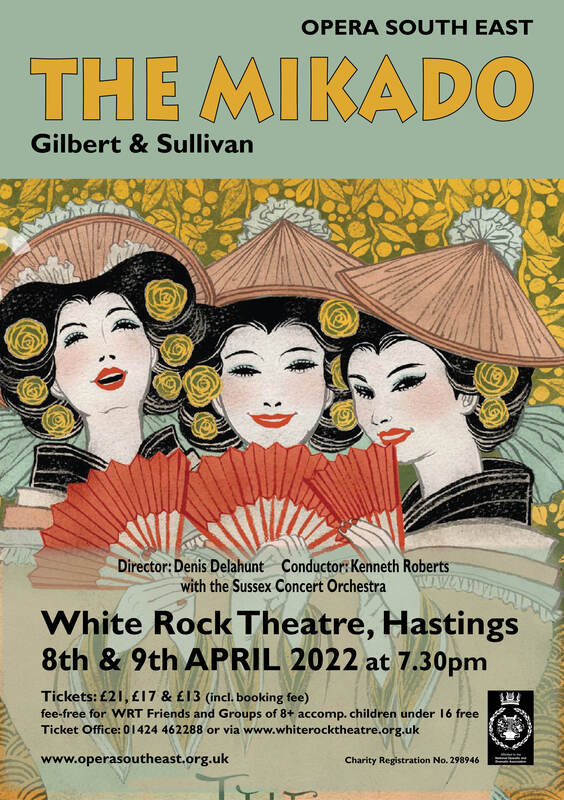 At the present time Gilbert and Sullivan’s Mikado is a tricky one to perform in an entertaining way, without provoking cries of, racism, cultural appropriation and general bad taste. Opera South East managed to pull it off on April 9/10 at the White Rock Theatre.

The artistic director, Denis Delahunt, made sure that references to the Japanese, in any derogatory way, were removed, and that the costumes were suitably modern. The emphasis was on fun.

The soloists were all very individual characters. The ‘three little girls from school’, entertained with their schoolgirl mannerisms and penchant for taking group selfies. Yum-Yum, played by Louisa Alice-Rose, grew up somewhat in the second half and gave us the full beauty of her voice in solo arias

Ko-Ko played by Oscar Smith was outstanding thoughout, holding our attention expressing fun and warmth in tension with his dastardly plans. His modernised ‘little list’, was full of laughs.

The chorus supported well musically, but I must confess I found them too static. Even though the set included an outside café, I don’t think anyone sat down and no drinks were served.

William O’Brien as Pooh-Bah however, utilised stiffness to express his character, which was only softened by ‘the insult of a bribe’.

The production was a triumph over the adversity of Covid stops and starts since 2019, and should be congratulated on its fruition.