The Attenborough Centre for the Creative Arts, Sussex University, Falmer,

Watching four different bodies combine on stage is one of the fascinations of seeing small-scale ensembles perform in chamber music concerts. We can’t know freely their actual personalities but we can search for clues in how they perform. Our eyes are drawn in all directions.

Here was another example in the frequent flow of Coffee Concert debut-making groups already operating at high level. This time, Quatuor Arod from Paris – intriguingly titled and individually answering to a metropolitan array of forenames and surnames yet again underlining the internationality of classical music ensemble formation down the ages. 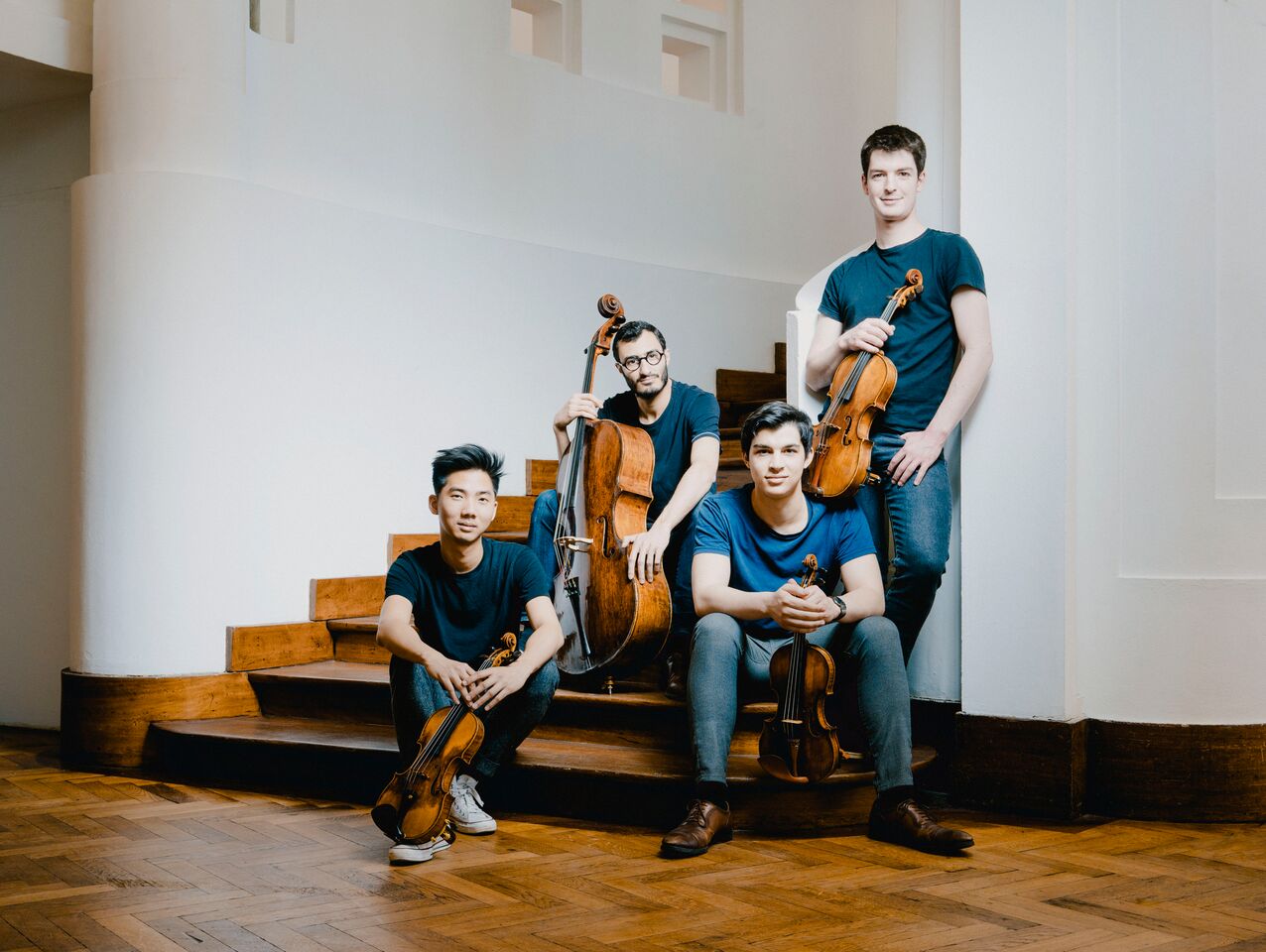 We had another absorbed lead violinist, contained in his movement, concentrated in his delivery, articulation and expression, alert to his waiting virtuosic responsibilities. A second fiddle with wild spiky hair around an oriental face prone to smiling and excitement, and a variety of seating leg positions – and, like his No 1, buckled down to his task.

Quite different on his left, a violist seemingly at leisure when at times, as though relaxed and at peace with himself and the testing music, who would lean backwards in his chair, towards an almost carefreeness, lifting his instrument above the level of his music stand as though a drinks glass lifted for a waiter behind him to refill.

On his left, a wirier bespectacled cellist, earnest in movement and his looks towards his violist especially, and bodily a like spring recoiling and uncoiling. Here was the quartet engine’s piston and cylinder, in constant readiness and frequent thrust, propelling much of the music in very French-seeming urgency.

Although some looks deceive. Far from being the old hand at all of this, violist Tanguy Parisot is the new boy bedding in, barely more than a month in the quartet, with his cellist and often ‘rhythm section’ partner constantly at work cementing their intended  bond.

Lighting in the Attenborough Centre concert hall was more subdued than normal. Cellist Samy Rachid told me afterwards Quatuor Arad requested it as they want listeners listening rather than reading (their programmes) during the music. This was not an April ‘I love Paris in the Springtime’ programme they brought north. But a rigorous, demanding but energising trip across three historic time zones where each piece was a preparation for the next.

Their programme had the rustic homeward galloping finale of Haydn’s cuspal 17th-18th century creation, The Rider, preparing us like a trainer would, for the exacting visceral, rugged, intellectual and spiritual challenge of Benjamin Attahir’s quartet completed this very year. And that preparing a context and perspective for us, 213 years on, to view afresh Beethoven’s second Rasumovsky – the reward for which was a finale that performed almost the same compositional function as Haydn’s horseback hurtle, except without a saddle.

Quatuor Arod’s plan succeeded. Audience reaction to their often intensely-felt Haydn was boosted vocally by young audience members who got the point and gave back effusively to the players. The Attahir renewed our awareness of, and respect for, the undying expressive power of this instrumental medium, the string quartet. And the Beethoven arrived as an enthrallingly broad experience and a strong affirmation of the Attahir’s relevance and worthiness.

Written by a Toulousian in this his own 29th year, a composer, conductor, violin soloist and innovative ensemble founder who writes from East and from West, in old forms and in new, Al ‘Asr is surely a test piece of our personal expectations of chamber music. Attahir, trained at two conservatoires in Paris, the western political flashpoint capital of Europe as well one of its cultural melting pots, had given us something that requires a westerner’s urgent study.

For world understanding, we need to know about and understand each other’s religions and habitats. Ignoring them is not an option, ignorance is no excuse. Learning and respect is our sole salvation. Our Western concept of prayerfulness in a cool climate is hardly found in this music, which – says our superb programme notes – is in three unbroken movements, each guided by the poetic and allegorical aspects of the three most revered verses of the Qur’an’s 103rd chapter.

Three verses of Muslim afternoon prayer. Their message is that without faith, good deeds, patience and truthfulness towards others, over time our lives incur internal loss. And that implies an impoverishment and downgrading of ourselves.

Very few of we in the audience will have been properly equipped to equate what we heard to what we were being told. And that must betray a musical as well as cultural insularity that has to be dangerous. This music should be required listening to help us close that gap. We have to understand why it does not match our expectations. At times it was electrifying, agitated, frantic, angry, with violin horsehair flying; and at times baffling, confusing and ungraspable. It ended suddenly, unexpectedly, as though without preparation, either climactic or with downscaling. No resolution was forthcoming.

This first hearing came at this bonus add-on 7th concert to the season which came, thanks to founder Strings Attached support group member Tina Gee. And it formed a memorial dedication following a death in February this year that all Coffee Concert fans should note.

Caroline Brown dreamed up and founded (and rounded) the Coffee Concerts at The Old Market, Hove, where she was artistic director 1998 to 2010 before her long illness and the handing on of these concerts by she and husband Stephen Neiman. A cellist, both performing and as a Royal College examiner, to her lasting memory also is her foundation of The Hanover Band, who co-led the post-1970s European excavation and embracement of period instrument practice and performance.

Fittingy, this concert, with Mr Neiman present after a long absence, took place at a venue within the precincts of Sussex University, who gave Caroline her honorary doctorate. At a recent concert in a London City church, I read the epitaph above the ashes of Proms founder Sir Henry Wood.

“He (she) opened the door to a new world of sense and feeling to millions of his fellows. He (she) gave his life for music and he brought music to the people.”

If this Attahir quartet work, thanks to Quatuor Arod at this closing concert of 2107-18, leads some of us to greater cultural understanding and appreciation, then a new facet of Caroline Brown’s legacy will be underway.