Following the exhilaration of performing with Hastings Philharmonic the previous evening, Kosovo Philharmonic Choir gave an a cappella concert to introduce us to a range of music which is almost totally unknown in this country. 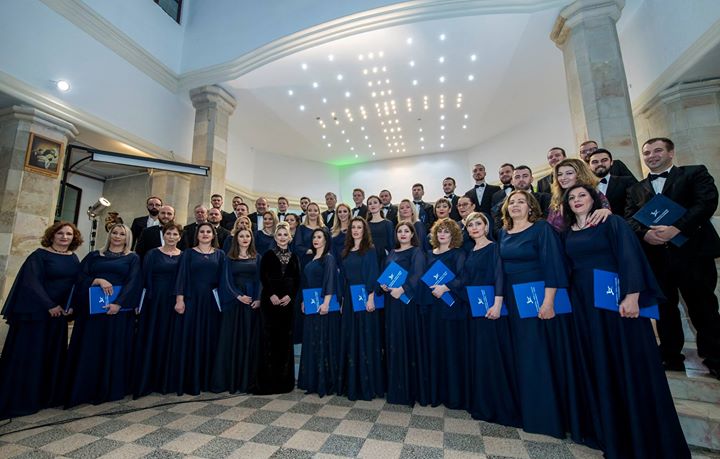 They opened with an austere, if ravishingly beautiful, collection of chants written between the thirteenth and sixteenth centuries. While mirroring the development of Gregorian chant in the western church there are hints of the eastern orthodox and even of Islamic modal qualities here.

Then we leapt forward to hear three twentieth century love songs by Thomas Simaku, Lorenc Antoni and Rexho Mulliqi. The latter’s Nje Lule opens with a wordless seeming improvisation for solo soprano which drifts above a quiet choral drone to stunning effect.

If the opening had been gently challenging the following two works very even more so but entirely convincing at the same time. Mendi Mengjiqi’s Music in the Circle is just that. The choir surrounded the audience and sang from A3 sheets on which the score is printed in a series of concentric circles. The singers slowly rotate the paper as they sing, and the wordless musical lines pass back and forth across the church. A mystical experience and one which would have been different for each of us, depending upon where we were seated.

Baki Jashari’s Pakez ne enderr for narrator and choir is regarded as one of the most important recent compositions for the choir and it was good to have the composer present. Unfortunately there was no translation available so it was impossible to follow the narrative as such though the dramatic impact and power of the piece was not in doubt.

The evening ended on a lighter note with a traditional song, a jolly, up-beat, setting by the choir’s conductor Rafet Rudi, and Jake Runestad’s dancing Nyon Nyon.

A splendid and very well supported event and as John Read said in thanking them, let us hope they are able to return again soon.