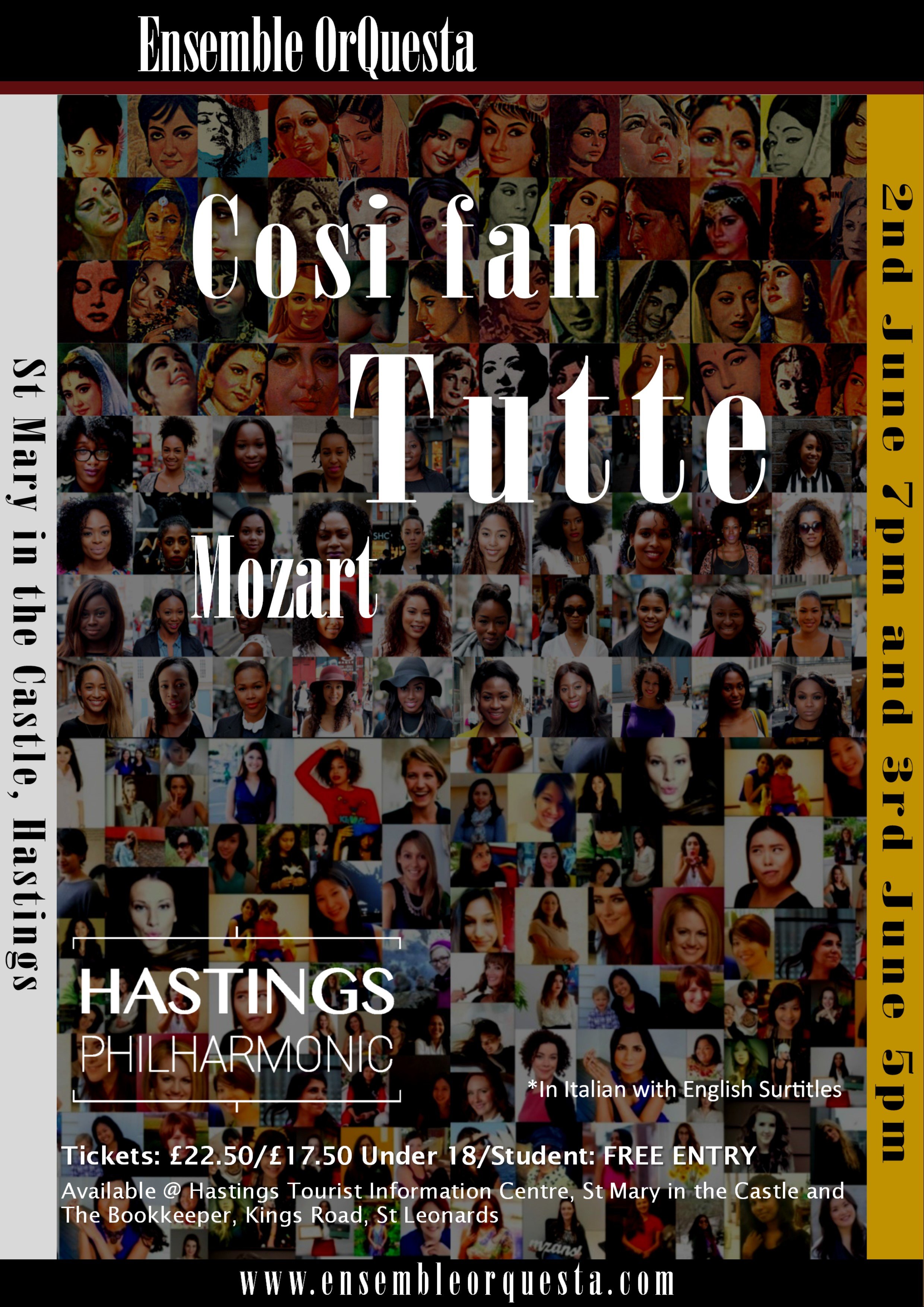 “That was the best performance of Ravel’s La Valse I have heard for probably 10 years.” One declaration from the audience summed up the excitement mounting as the Sussex International Piano Competition moved last night (Wednesday 9 May) towards its Semi-Final stage.

Hove piano expert and international artiste manager Tony Purkiss was referring to the appearance on Tuesday, the first Quarter-Final day, of Rhythmie Wong, a young woman from Hong Kong. But what would the seven-strong Jury think on Wednesday evening, after the second nine of the 18 competitors had completed their maximum half-hour programmes of solo piano?

Deliberations took more than an hour until at 9.15pm, SIPC artistic director, the Worthing Symphony Orchestra’s chief conductor John Gibbons, announced the final six pianists to reappear in the Semis tomorrow afternoon and evening (Friday). Rhythmie Wong – who, as well as playing violin, clarinet and composing, has a sister named Harmonie – made it, but was the last to be named. She also will be the last of the sextet to play in the Semi-Final, according to the draw made by inaugural 2010 SIPC winner Arta Arnicane.

Wong is unobtrusive, thoughtful, quietly-spoken, mild-mannered and gracious. And she was the only competitor across the two days of quarter-finals who sat in The Assembly Hall to listen to all 17 other rivals for the £5,000 top prize from the Bowerman Charitable Trust, with its bonus of recording a CD at the Bowerman base at Champs Hill Records in Coldwaltham, West Sussex. From such a personality it appeared a calm gesture of respect and enjoyment, and far from a forensic surveillance operation.

The other six Semi-Finalists will be:

1pm: Antonina Suhanova, a Latvian at Guildhall School, she has undergone masterclasses from Vladimir Ashkenazy and Yuja Wang among others, and has soloed in concertos with the Latvian National Symphony Orchestra under Andris Nelsons.

2.05pm: Kenny Fu, the only one of four Britons surviving the cut, who has an Elton John Scholarship to the Royal Academy of Music, and was in the London Purcell School’s Impulse initiative taking classical music performance and workshops into primary schools.

3.10pm: Alon Petrilin, a product of Israel’s Jerusalem Academy of Music and Dance, he has appeared at St Petersburg’s White Nights festival in Russia and New York’s Carnegie Hall, has broadcast on Israeli radio and given concerts in Western Europe, Mexico and the US.

6pm: Sofya Bugayan, a Russian from Rostov-on-Don, the same home city of 2015 SIPC semi-finalist Anna Bulkina, where Bogayan is the youngest teacher ever appointed at Bulkina’s Rachmaninov Conservatoire.

8.10pm: Rhythmie Wong, based in Cologne, performances in Germany, US, Italy, Croatia, Norway, UK, Hong Kong, Macau, Cambodia, Dublin, and New York’s Carnegie Hall and the Jordan Hill in Boston, with TV appearances in Hong Kong, including educational, and in Macau.

Haydn has been chosen by an unusually high proportion of the contestants, reflecting the current growth in love and admiration for this composer so long taken for granted and downgraded by generations regarding his heirs and successors as superiors, and by old opinion-shaping killjoys viewing Haydn’s use of humour as trivial and inconsequential in music.

In this refreshing interpretative 18th century classical alternative to the heavyweight romantic and 20th Century music pervading piano competitions, eight of the 18 pianists presented Haydn Sonatas, including four of the six semi-finalists, with three of those choosing Haydn for this crucial final solo round – Petrilin, Chang and Wong.

Now the next intrigue: here is what they will play in the Semi-Finals (previous round choices in brackets, which were performed alongside the compulsory quarter-final piece, Alwyn’s The Devil’s Reel):

The Jury are distinguished pianists, agents and managers. As well as technical proficiency they aim to reward quality of programming, artistic flair and connective ability with the audience.

The Grand Final will be on Sunday 13 May at 2.45pm, the final three competitors playing a concerto each, of their choice from a specified shortlist, with Worthing Symphony Orchestra and John Gibbons at the helm. Tickets from Worthing Theatres box office 01903 202331.

The special Worthing welcome to highly-talented young musicians from around the world began on Monday 7 May 2018. The fourth tri-annual Sussex International Piano Competition launch evening at the pier’s Southern Pavilion brought together the organisational team and artistic director and competition founder John Gibbons with the competition organisers, the competitors and their hosting families and individuals.

Gibbons, who conducts the competition’s Grand Final Day orchestra, the fully professional Worthing Symphony, once again stressed the integrity of the competition’s conduct, as a declared antidote and reaction to the dubious and undercover practices commonly found in classical musical contests.

Touching on one area of nudges and winks, the entry process is policed along strict anonymity. “Every competitor,” Gibbons assured the launch audience, “sends a CD of their playing, which is then presented to the judges unnamed and just given a number. So those are accepted are entering the competition completely on merit.”

There are only 18 competitors this year – the smallest SIPC field so far – from an original selection of 24. There have been six withdrawals, including one for a hand injury, plus said Gibbons, “a couple who were ill and others who have had problems obtaining visas owing to the political situation.”

Illness has removed Maria Luc, who is from Chichester, but there is Sussex interest in Yasmin Rowe, whose home is Yapton but is based presently in Melbourne, Australia. There is representation from, among others, South Korea, Taiwan, China, Hong Kong, Latvia, Russia, Uzbeckistan, and the east and west coasts – and mid-west – of the United States.

Host families include at least eight first-timers, and have come forward mainly from the Worthing area. Their hospitality and the spirit and strict openness of the SIPC ethos shape the competitors’ experience for subsequent word to be taken around the classical music globe.

This year’s competition organisation, headed by Gibbons with assistant John Gander while steered administratively by former co-director Tim Chick, has brought about the 2018 competition thanks to the industry of hosting guide Gill Tucker and her new colleague Jill Silversides.

The Quarter-Finals run today (Tuesday, 11.30am, 2.45pm, 6pm) and Wednesday  (same times) when the semi-finalists will be announced at around 8.30pm.  William Alwyn’s five-minute technical and artistic test piece The Devil’s Reel confronts each contestant. At the last SIPC, Varvara Tarasova won the prize for this, and the Audience Prize, on the way to First Prize in the Grand Final, in which all three finalists each perform a concerto with WSO and Gibbons. She swept the board after playing Chopin’s Concerto No 2. Will someone emulate her this year?

The Semi-Finals take place on Friday 11 May (1pm, 6pm), the Grand Final on Sunday (2.45, result ceremony at around 6pm). In view of the tests of the Quarter- and Semi-Finals, the Concerto performance will not be the all-governing factor and everything takes place in Worthing Assembly Hall featuring its Steinway piano and renowned acoustic. Tickets from Worthing Theatres include an inclusive one for the three initial days of the two early rounds.