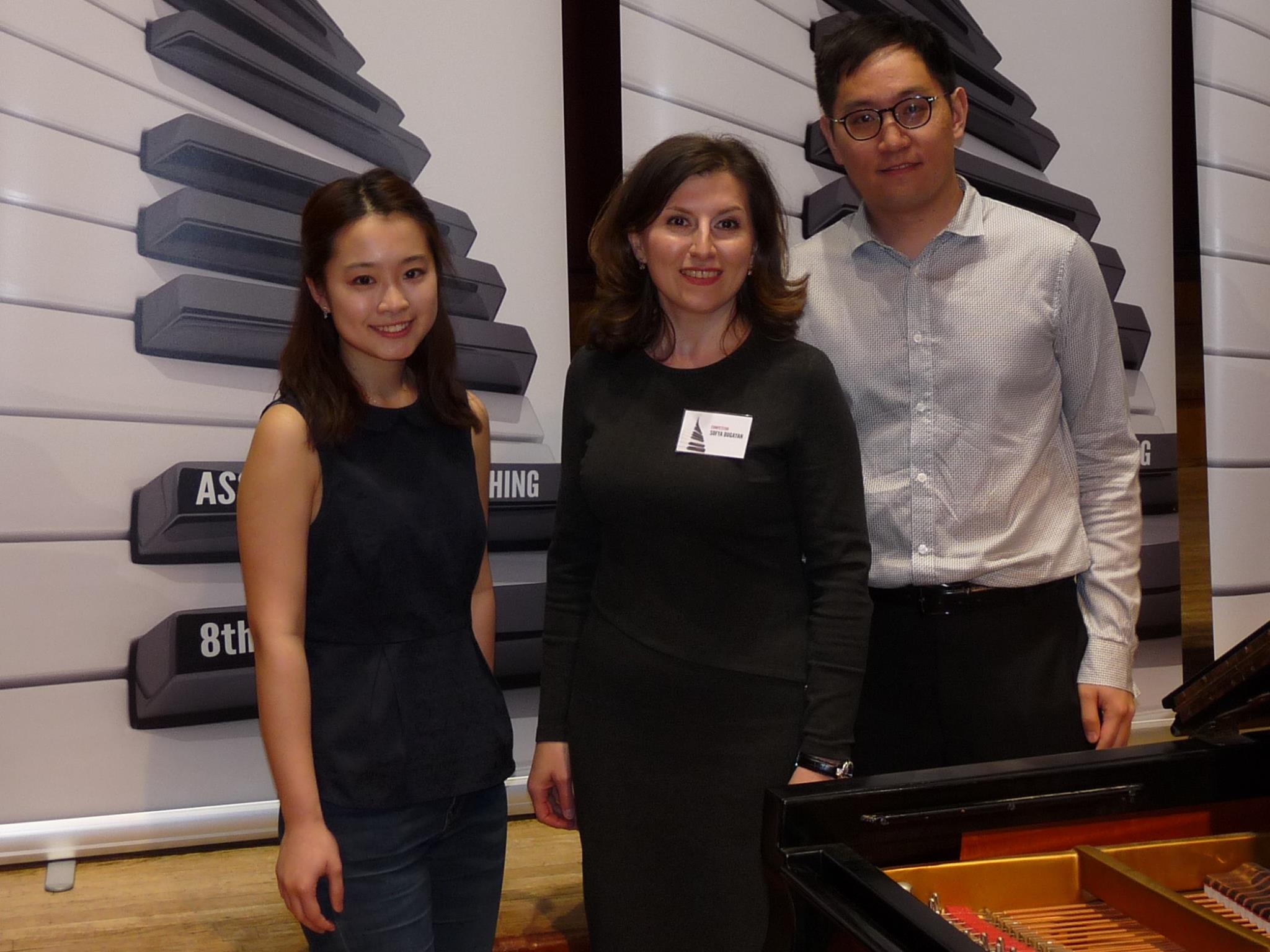 The oldest finalist in the Sussex International Piano Competition, the first competitor at Worthing to include their own composition, and a glowing example of three of the four things the Jury seek. These factors are carried forward into tomorrow’s Grand Final at Worthing Assembly Hall (May 13, 2.45pm) by, respectively, Sofya Bugayan, Yi-Yang Chen and Rhythmie Wong of Russia, Taiwan and Hong Kong.

This competition is not ageist.  No limit on years is imposed. It balances a duty to provide opportunity for youth alongside celebrating wisdom and experience. Bugayan became the first SIPC finalist older than 30 when, at 36, she held off a formidable challenge from the second youngest of these final six pianists, Israeli Alon Petrilin, 23.

And with possibly one glissando too many in Agosti’s own arrangement take on Stravinsky’s piano version of his orchestral ballet score The Firebird, Cologne-based Rhythmie Wong swept into the final with more than enough technical ability, quality programming and artistic flair. In the latter two qualities, Chen ran her closest.

His de Falla (Fantasia Baetica) in the opening round already helped mark him out as a leading contender in all three counts, while Wong’s Ravel (La Valse), a similarly extrovert piece, had scored the highest possible marks with the particular audience member I actually misquoted previously.  Now corrected, I can report that ‘The best performance of the piece I have heard in 10 years’ should read “The best playing of ANY piano piece in that time”.

The fourth Jury requirement, ‘ability to connect with the audience’ in dry recital amounts to the sum of the previous three parts. But if Bugayan appeared outstripped by others in variety of programming, which from her amounted to a single work by Schumann (Humoresque) in the first round and selected late Brahms with Prokofiev in the second, she will probably have impressed in the Jury’s search criteria with the absorption, control and intensity of her playing.

Compared with (10 years her junior) Antonina Suhanova’s earlier performance in the day, Bugayan’s Prokofiev 8th Sonata, a war work, seemed to come with softer, more human edges in the initial two mournful and troubled movements, and a iron grip on the bitter, violent, sometimes hysterical finale. Her deep affinity with Prokofiev dates back to childhood.

Petrilin, outstanding in the first half, set up a formidable fence for Bugayan to clear. The apparent dark horse, in a field headed by Chen and Wong’s variety of musical offering, Petrilin created an awe-inspiring atmosphere with Liszt’s Ballade No 2. Then, on the light-actioned, luxuriant Steinway he declined to celebrate Haydn by following the’ brittle sound brigade’ and instead let the instrument have its own unpedantic say on the composer.

Then Petrilin unleashed the startling half-crazed Barber Sonata, written to throw down the gauntlet to that era’s leading virtuoso, Vladimir Horowitz, with the express intention of ensuring him a string of sleepness nights ahead of its first performance.

Kenny Fu, only 20, shares London domestic accommodation with wonder-boy cellist Sheku Kanneh-Mason’s violin-playing brother Braimah at The Royal Academy of Music. Kenny was in only his second open competition. He promised more than experience let him to deliver on the day but indicative of his talent is his Russian teacher Tatiana Sarkissova (wife of Dmitri Alexeev) setting him the high bar of Beethoven’s late Opus 109, and then the Rachmaninov 2nd Sonata, in which he was eclipsed by Chen.

Yet if Fu’s tender years found him out in the Beethoven, the six-years-older Wong’s Haydn showed no shortcomings. From such a young player it displayed everything one might dare ask from a 40-something steeped in Haydn.

Wong’s playing bristled with character of many types. With the pauses of a well-practised humorist, she created anticipation before every paragraph. She kept you guessing if there would be a joke or not. She had you on the edge of your seat. Yet each pause seemed uncontrived, merely a natural break for breath, but still each successive one created more pregnancy.

And late in the finale – the requirement of any genuine Haydn player – more than just smile, she made me actually laugh. An act of supreme musicianship. She even created one astonishing toccata-like section in a blur of two alternating hands that would have ignited the Haydn’s ecstatic London audiences. A super Haydn player, not in the making, but already here.

One stage away from the Final round of chosen concertos tomorrow (Sunday, 2.45pm), this competition is far from over. Hoops and fences remain. Someone may fall at the last. Young pianists come to competitions short on concerto experience. The Worthing Symphony Orchestra and conductor John Gibbons, artistic director both the band and competition, await them with help.

Twice now, we have heard the final three – performing alone. Stalwart Jury member Yuki Negishi made the draw on stage for the playing order. Wong will go first in Chopin’s E minor Concerto, No 1.  In the first round, she played a Chopin Rondo. She seems unerringly to resurrect the spirit of each composer she plays. Doing that in Chopin No 2 was Varvara Tarasova in the previous Grand Final.

Second to go will be Bugayan – the new dark horse. The daughter of Armenian emigrants, a folk clarinettist and an accordionist on her father’s side, 10 years ago she became the youngest piano professor in Rostov-on-Don’s Rachmaninov Conservatory. She is in this final without using dazzlers in the standard solo show-off repertoire. “I wanted to travel, start playing in competitions again, and see the English Channel,” she says, disarmingly. But she brings a weapon of fire: Tchaikovsky’s 1st Piano Concerto.

Yi-Yang Chen has been in the US for 12 years, now an assistant piano professor at East Tennessee State University, Johnson City. He has played 20 competitions in nine years. Will Beethoven’s 4th Concerto take him to the £5,000 First Prize from the Bowerman Charitable Trust, plus the Champs Hill CD recording? Second prize is £2,000 and third, from Gisela Graham Ltd, is £3,000. The eliminated semi-finalists have received reward from the Worthing Symphony Society.

There can be no clean sweep repeat of Tarasova’s 2015 achievement. The British Music Prize from the William Alwyn Trust for the best interpretation and performance, from memory, of Alwyn’s The Devil’s Reel, has gone to a pianist who was ill on the day. A fact ironical – or instrumental? The winner: Bristolian, Daniel Evans (yes, British).

The Audience Prize, donated by Helena and Ti m Chick, is determined by votes from the audience at the final. Tickets from Worthing Theatres box office 01903 206206.