An all-Russian evening to end the season – and what a splendid season it has been as Peter Colman rightly notes, with an equally exciting programme in view for the autumn.

The evening opened on familiar ground with Tchaikovsky’s overture Romeo and Juliet. In his introductory remarks – always a welcome start to the evening – conductor Brian Wright had noted that the royal wedding was not in view when the programme was planned and he hoped that the outcome for the royal couple would be somewhat better than that for Shakespeare’s lovers.

The overture opened with a brooding tension which was held throughout, the emotional outpouring coming with all the intensity of snarling brass and rasping woodwind.

Prokofiev’s third piano concerto linked in quite well with the emotional power very much in evidence. Pianist Martin James Bartlett may have had an injury to his thumb but there was no evidence of this is the quality of his playing or the staccato, percussive attack he brought to his reading. The occasional romantic reflections become all the more effective in the midst of such challenging attacks on our senses. His encore, a gentle piece of Schumann, was all the more moving in the light of the contrast to the Prokofiev. 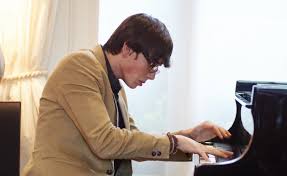 After the interval Shostakovich’s First Symphony sat comfortably within this company. Its tongue-in-cheek opening movements were very well structured, with a strong sense of line and pace. Then came the bleakness of the third movement with its fine opening oboe solo and developing sense of depression. If the finale tries to overcome this darkness it only does so by fits and starts, and Brian Wright’s approach left us wondering just how enthusiastic we should be about the bombast of the finale. For a student piece, this is amazing and makes us eager to hear how Shostakovich develops this near schizophrenic approach to composition in the later symphonies.

The new season opens on Saturday 13 October with familiar works by Britten and Mussorgsky, and Shostakovich cello concerto no1 with Michael Petrov. Season tickets now available and individual concerts at www.mso.org.uk