In the 18th   & 19th centuries St. Laurence Church had a Quire, a group of singers and other villagers who played perhaps fiddles, a cello, a flute, a clarionet maybe even a bassoon. 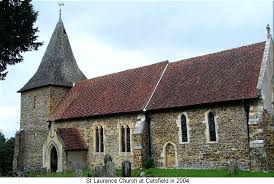 The musicians having played for a dance on the Saturday night  would turn up on Sunday together with the singers to lead the service up in a gallery at the west end of the church.

Who played what or who sang is not known but what they sang and played is, thanks largely to one man, Canon Kenneth H MacDermott.

In the late 19th century when he was curate of Hurstpierpoint he began his research into this music prompted by an old manuscript book he was given. He wrote to over 200 church choirmasters seeking information about church bands and their music. With the resultant information he was able publish a book entitled ’The Old Church Gallery Minstrels’.

Amongst the documents he received were 9 books from Catsfield, some from Miss Louisa Blackman (grand-daughter of a Robert Blackman) and some from a Mr T C Poulter, whose    great-grandfather, a Mr Crouch, was a musician in the band.

They of course were all hand written and most quite tricky to decipher, they contained 175 different items of music.

Almost 25 years ago some of this robust music, with strong tunes and words, was published in a book entitled ’The Singing Seat’ (another name for the west gallery).

So to celebrate Sussex Day, Sussex Harmony, a West Gallery Quire, is returning to Catsfield to perform a selection of these pieces interwoven with readings and snippets of history from the period.

The concert is on 16th June in the Village Hall starting at 7.30p.m.

It will be free to come in BUT there is a retiring collection. Refreshments will be available and participation in singing some of the pieces will be encouraged