We were promised Colourful Classics and colourful they certainly were – though the visual impact was anything but! The hall was in darkness for the concert, with the stage curtained in black and the orchestra is evening dress. Added to this the stage was heavily back lit so that Brian Wright, raised on the conductor’s podium, looked like a figure from Fantasia. 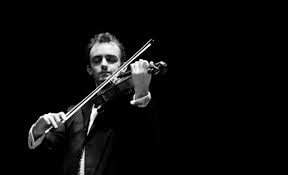 Happily none of this affected the genial mood and the joy of the music-making. The evening opened with Mendelssohn’s Hebrides Overture more popularly known as Fingal’s Cave. For once the difficult acoustic played into Brian Wright’s hands as the strings sang out with gentle fluidity and the wind and brass seemed mellowed behind. It was ideal for this work and seemed perfectly in keeping with a concert by the sea. Perhaps on another occasion it might be possible to leave the side curtains open so that we could see out as well as in?

At this point we might expect to go straight to the concerto but we were given a short reflective pause with Elgar’s Elegy Op58. This brief work hints at much more than it shows, and the reflections of late Wagner and even Sibelius make it all the more effective.

Violinist Benjamin Baker’s relaxed stance should not lull anyone into thinking he is anything other than one of the finest young musicians today. His playing of the Tchaikovsky violin concerto was as exciting and musically enthralling as any other soloist I can recall. Unafraid of the full blooded romanticism of the score he yet found a nocturnal introspection in the slow movement which was captivating. The orchestra were more than up to his intensity and speed – what a tempi for the final movement! – it was only a pity he was not able to give us an encore.

If Beethoven’s Seventh Symphony seemed somewhat calmer after the interval this was only by way of comparison, for Brian Wright found the fire as well as the dance which runs throughout the score.

The funereal overtones of the Allegretto took us back to the Elgar while the final movement sprang to life with the joy of the earlier works.

The house was full – fuller than I recall for many years – and totally justified by the quality of what we experienced.