The Portuguese pianist, Pedro Gomes, brought us a finely honed programme which led us from the familiar to the highly challenging at the Opus Theatre last Saturday, but one which was founded on superb musicianship and a warm emotional impact. 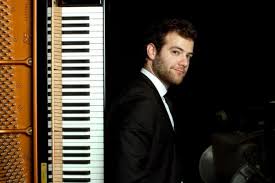 He opened with Beethoven’s Pathetique Sonata Op13 No8 which proved highly charged from the start. Hearing Beethoven within the enveloping space of the Opus Theatre is quite different from hearing him within a two thousand seater concert hall. Here the rapport between audience and pianist is far closer and we are more aware of the sheer physicality of his playing as well as the nuances of emotional change as the work progresses. The opening Allegro di molto was highly charged from the start with crisp articulation throughout. The very familiar Adagio cantabile provided delicate phrasing without any sentimentality, flowing effortlessly into the drive and almost playful phrasing of the final Rondo.

Rachmaninov’s popular G minor Prelude Op23 No5 was the first of four preludes which effectively formed a symphonic suite in their own right. The romantic ballade which forms the basis of Op23 No4 brought us the slow movement while the furious attack and pace of Op23 No7 was as challenging a Scherzo as one could imagine. It was difficult to believe this was actually being played by two hands not four. The final Prelude Op32 No13 is more complex and seemed to be paving the way for the final work, Prokofiev’s Sonata No7 Op83.

The tonal impact of the piece as a whole and the ferocity of much of the playing well reflected its title as one of the composer’s War Sonatas. It may have been a coincidence that the slow movement paralleled the slow movement of the Beethoven, but the point seemed well made – while the melodic line is a ghostly reflection of the earlier work, we have moved from the potential comfort of romanticism to the reality of the modern. There are hints here of a smoky night-club which lull us into complacency before the morning bells warn of the return to reality, and an intense power which comes close to the destructive.

After such an outpouring of energy an encore may not have been expected but Pedro Gomes returned to play his own jazz improvisation on Rondo a la Turk. It was magnificent and a wonderful way to end the evening. Last week Oliver Poole had improvised two pieces for us and now here was Pedro Gomes doing the same. What a delight that young pianists seem so joyously able to work across a wide range of music!