A simple programme to open the new season but one which demanded a high level of technical expertise as well as extrovert energy.

Roman Kosyakov was the popular winner of this year’s Hastings International Piano Competition and was returning to the romantic repertoire with Brahms’ Second Piano Concerto. However his approach, and one certainly supported by Marcio da Silva in his handling of the score, was dynamic and often aggressive. Roman Kosyakov’s playing is highly percussive, with snapped chords and very tight rhythms, which look forward to the twentieth century rather than relaxing in the romanticism of the mid-nineteenth. While this provided a genuine excitement it did at times seem to skirt over the more reflective passages, with only the finely honed third moment – with beautiful cello solos – bringing us some points of introspection. That Roman Kosyakov can conjure up genuine sensitivity was admirably demonstrated in the brief but gently fleeting encore. 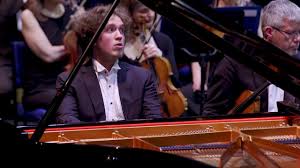 After the interval – and the full house meant that a little more time than usual was needed – we heard Beethoven’s Seventh Symphony. The balance here was even better than it had been in the Brahms and the solo instruments sang out magnificently, fully supported by the string section. Hopefully the orchestra will eventually be able to run to an extra desk for each of the string sections, but it is surprisingly strong at present given the small scale.

Tempi were brisk throughout and the cellos again excelled in the Allegretto with real warmth and depth. There was a lively bounce to the third movement before we hurtled into the finale. The tempi here was perfectly justified by Beethoven’s own markings but more than that was more than within the players professionalism to follow Marcio da Silva’s clipped rhythms and tense phrasing. It was exhilarating.

A splendid start to the new season with a large and enthusiastic audience. Long may it continue!