There are certain types of music which work spectacularly well in St Mary in the Castle and Baroque music, both vocal and instrumental comes at the top of the list. If one adds to this the presence of The Sixteen, under Harry Christophers, singing Palestrina and James MacMillan and surely it can’t get any better. 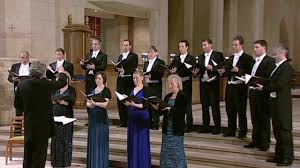 Their programme The Queen of Heaven is based on settings of Marian hymns by Palestrina and the contemporary composer James MacMillian, whose gently unfolding a cappella scores are a perfect accompaniment to the earlier works.

The evening opened with the plainsong setting of Regina caeli with eight of the male singers processing from the back of the building while chanting the text. This gave way to the wonderfully mellifluous setting by Palestrina of the Kyrie from the Missa Regina caeli, which floated and lifted gently into the dome above. James MacMillan’s Dominus dabit benignitatem was not a million miles away with its reserved if lyrical approach to the text.

Possibly the only work which may have been known to all present was Allegri’s Miserere but the new version we heard was stunning not only in the beauty of the part singing but the sense of ornamented lines emerging from the quartet in the gallery. Rather than waiting for the obligatory high note (for which we know there is dubious evidence) the improvised approach led us inevitably to the upper notes of the solo soprano, but always within the framework of the musical line, rather than simply as a clever add-on.

To conclude the first half we heard MacMillan’s Videns Dominus with its Scottish rhythms and earthy sense of reality, and finally Palestrina’s Stabat Mater.

The same composer’s Regina caeli opened the second half with a joyous alleluia before a triptych which sandwiched MacMillan’s O radiant dawn between two flowing settings by Palestrina. In contrast to the Allegri, MacMillan’s own setting of the Miserere was the most challenging of his works here on offer, though it maintains great simplicity and beauty of line throughout, opening into an opulent romantic melody towards the end.

The evening concluded almost where it had begun with the Agnus Dei from Palestrina’s Missa Regina caeli, bringing a real sense of faith and hope as the line climbed ever higher.

The following evening brought us Baroque chamber music of surprising intimacy. Given the large spaces of St Mary’s, the softer sounds of gut strings and unamplified guitars needed a higher level of concentration but more than repaid the effort involved.

Hemf Baroque opened with a suite of short works by Blow and his pupil Purcell. The latter’s lovely Rondeau from The Fairy Queen was followed by an equally impressive Ground from Blow’s Venus and Adonis. Jane Gordon was herself the soloist in Telemann’s A minor violin concerto TWV51 which is splendidly engaging for all its brevity. The first half concluded with Bach’s 5th Brandenburg Concerto. The ensemble were joined by Baroque flautist Neil McLaren but the noteworthy contribution came from harpsichordist Julian Perkins. He played throughout the evening but the Bach work allows him to shine in the extended cadenza for solo harpsichord which Bach obviously wrote for himself to show off his wonderful new instrument. It was most impressive.

A slight change of order for the second half brought us Vivaldi’s Double Mandolin concerto arranged on this occasion for the EdenStell Guitar Duo. If the guitar does not have the bite of the mandolin, particularly in St Mary’s acoustic, it does have great delicacy as demonstrated in the radiant beauty of the second movement which has the soft silence of a hare in the snow.

Corelli’s Concerto Grosso Op6 No1 brought lively interaction from the soloists and led into a rustically enjoyable reading of Vivaldi’s Autumn from the Four Seasons to conclude a wonderful evening. Again the audience was large and enthusiastic – a tribute to Jane Gordon’s organisational skills and ability to bring us some of the finest Baroque musicians alive today.