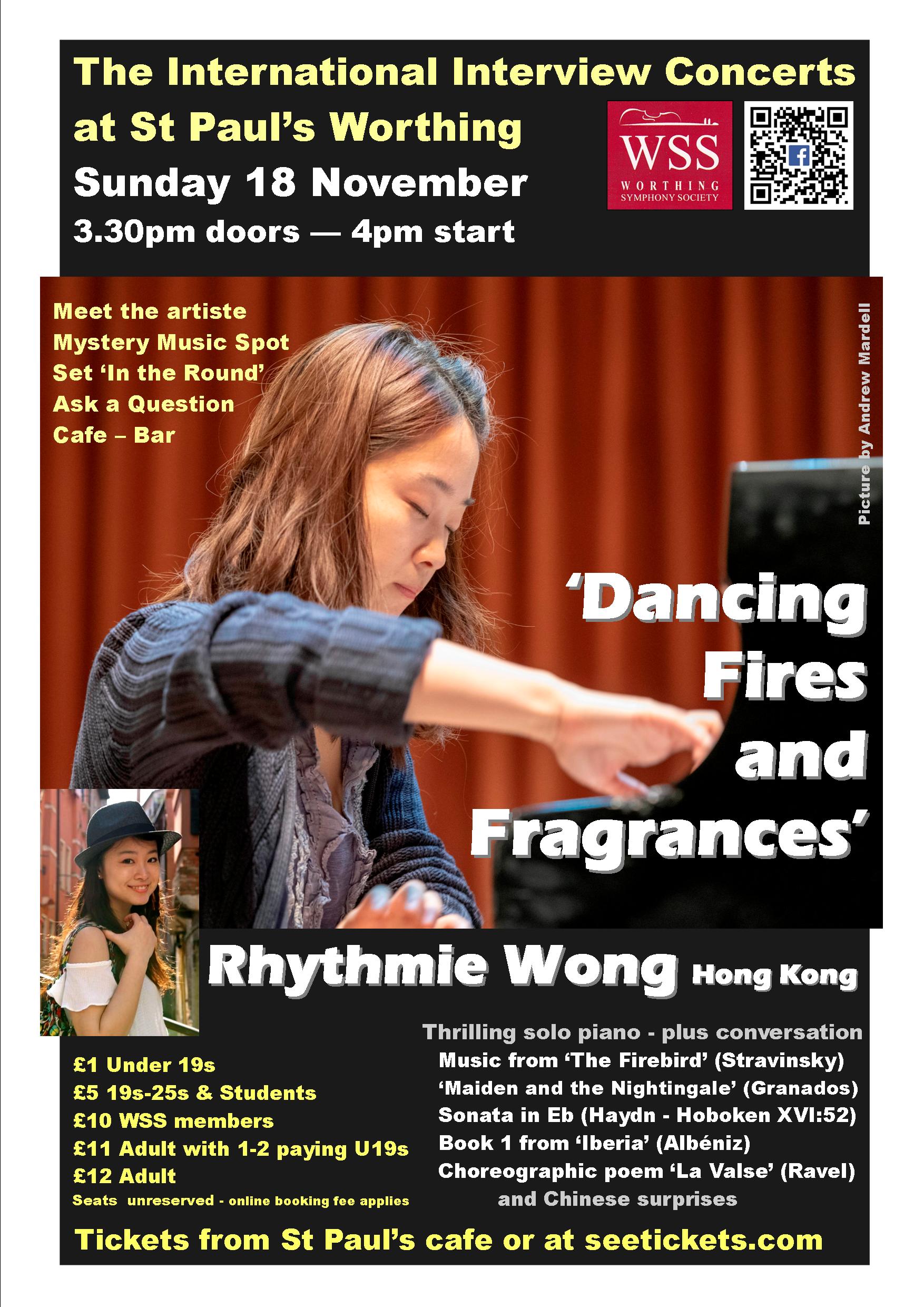 . . . Things said and written this year about pianist Rhythmie Wong, who is the next Interview Concerts guest artiste at St Paul’s Worthing on Sunday November 18 (3.30pm for 4pm). Indicative of her artistic breadth and background, she also plays violin, clarinet and composes. A young native of Hong Kong, incidentally, her parents named her sister Melodie.

Rhythmie Wong’s repertoire for this concert  creates a feast for the senses and imagination. Her poetry and virtuosity ignited and sent shimmers of admiration and anticipation through the Sussex International Piano Competition (SIPC) at Worthing in May. She is one of the three finalists due automatically to appear in these now keenly-awaited concerts.

The International Interview Concerts are Worthing’s intimate open door into the music that changes so many people’s lives. They are not the spectator world of stadium rock, large concert hall or formal recital room, but great music in personal close-up to be experienced by anyone.

The performer sits with the audience as though in a large domestic setting, and direct connection comes through personality-revealing conversation alongside the music performance. The informality creates a bond shared among the audience.

Each Interview Concerts celebrates its internationality and is creatively given its own presentation flavour, ambience and look. The feel is warm and inclusive. Seating is in the Round. The Ask A Question section is for the audience. They respond, react and interact in the Mystery Music Spot.  They can meet the artiste afterwards.

Rhythmie co-conceived the new feature Mystery Music Spot and brings from her base in Cologne a head full of exciting solo piano music in a remarkable programme of unaccustomed power, stature and atmosphere, entitled ‘Dancing Fires & Fragrances’.

There is Russian fairy-tale ballet music from Stravinsky’s beloved ‘The Firebird’ in Agosti’s transcription from the magical, mesmeric orchestral music. Another translation into piano comes from the highest French expert, Ravel – his own vivid ballroom costume drama, ‘La Valse’. Rhythmie’s account of this startling piece caught experts’ breath during the SIPC as she surmounted its multiple demands.

She will bring alive songs, tunes, dances and fragrances in two extracts from the greatest Spanish piano music. Book 1 of ‘Iberia’ by Albeniz and, by his friend Granados, ‘The Maiden and The Nightingale’, from his suite ‘Goyescas’, inspired by the paintings of Goya and later to spawn an opera. These nostalgic, pictorial pieces, range from nocturne and evocation, through fandango, jota and zapateado, to a full-scale public parade in Seville.

She will become the first person to play Haydn at The Interview Concerts. It will be his expansive abd masterly final Piano Sonata (No 52 in Eb), in which later we can revel in her rare ability to transmit and share the fun and teasing humour in Haydn. She plays him superbly.

The St Paul’s piano will be hitting heights on a scale not since Dinara Klinton’s transcendent Liszt, Beethoven and Scarlatti two Junes ago. And among the Interview Concert surprises will be some Chinese, with which Rhythmie will return the international welcome Worthing will be giving her.

Seats unreserved . Doors at 3.30pm. Ticket prices top at £12 adult. Concessions down to £1 for Under-19s. Available in person from St Paul’s cafe-bar, or at seetickets.com