Iranian tenor, Ramtin Ghazavi has a rapidly increasing international reputation and thanks to Artist-in-Residence, Oliver Poole so has the Opus Theatre. Bringing the two together was a master-stroke which came to fruition last Saturday with a concert of Italian and Iranian song. 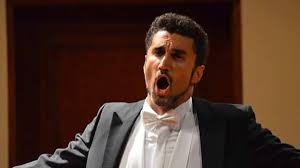 Though much of Ramtin Ghazavi’s repertoire is based on the familiar operatic canon he chose to sing a more interesting programme based around Italian song and, to us, unknown Persian songs.

Paolo Tosti may be a familiar 19th century Italian composer but less known for the fact that he lived for many years in England and some of the songs we were to hear were written locally in Folkestone!

They opened with his well-known song – A vucchella – moving on to the tolling bell motive of Tormento and the fluid romanticism of Ideale. The songs sat very comfortably for Ramtin Ghazavi as they allow an operatic approach while giving some freedom for a more delicate, sensuous intimacy.

The first half ended with Faure’s Les Roses d’Isapahan with its gentle phrasing and subtle harmony.

After the interval we heard three Persian songs which proved to be heady in their romantic intensity and emotionally forth-right. The last of these – Aay sar kotal-  did not have a piano part so Oliver Poole drew on all his considerable skills to create the accompaniment.

The final section was on more familiar ground with De Curtis’ Non ti scordar di me and Leoncavallo’s Mattinata, where Ramtin Ghazavi almost produced the necessary sob in the voice.

In both halves Olive Poole provided a pyrotechnic solo in the form of Wagnerian arrangements from the Ring Cycle – a lurid reading from Das Rheingold and a more conventional version of the Ride of the Valkyries, both with more notes than he appeared to have fingers.

A wonderful evening needed an encore which followed in the shape of an improvised version of O Sole mio – gloriously created and leaving us all wanting more. When he is appearing at La Scala and The Met we will recall we heard him at the Opus!