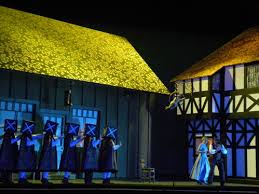 ENO Music Director Edward Gardner will lead the “world-class” ENO Orchestra and Chorus (WhatsOnStage) alongside an outstanding cast in Wagner’s comic masterpiece The Mastersingers of Nuremberg. Known for championing British and British trained talent, ENO will field a predominantly British cast led by one of ENO’s major discoveries of recent years, Iain Paterson, making his role debut as Hans Sachs.

Originally created for Welsh National Opera in 2010, Richard Jones’s spectacular staging of Mastersingers comes to London for the first time. Jones provides a “clear and brilliant” (The Arts Desk) retelling of Wagner’s drama about the 16th-century guild of amateur poets and musicians called The Mastersingers. The tensions between creativity and conformity are played out in a society obsessed with rules and regulations.

This production originated at Welsh National Opera where Richard Jones’s “questingly intelligent staging” (Daily Telegraph) was enthusiastically received. The Mastersingers of Nuremberg forms part of a series of works that Richard Jones will direct as part of an ongoing collaboration with ENO. His recent productions for the company include Rodelinda and The Girl of the Golden West, both of which received an outstanding critical and audience response. Richard Jones has been made a CBE for Services to Music in the recent New Year Honours List.

Leading Wagnerian bass-baritone and former ENO Company Principal Iain Paterson will sing his first Hans Sachs. This will be his second Wagnerian role debut this season, following on from his “impassioned and magnificent” (WhatsOnStage) success as Kurwenal in Christof Loy’s production of Tristan und Isolde at the Royal Opera House.

Brilliant singing-actor Andrew Shore, whose ENO triumphs range from Donizetti to Britten, makes his stage role debut as Beckmesser. He was most recently seen at ENO in the twin cameos of Benoit and Alcindoro for La bohème, and will return to the London Coliseum in May as Major-General Stanley in Mike Leigh’s new production of The Pirates of Penzance.

British soprano Rachel Nicholls, an exceptional and experienced Wagnerian, sings the role of Eva. She sang her first Brünnhilde inGötterdämmerung for the 2012 Longborough Festival, returning for three complete Ring Cycles in 2013, and was described by The Guardian as “The most impressive British Brünnhilde for years”. Her performances as Senta in Scottish Opera’s 2013 production of The Flying Dutchman were described as “powerful” (The Times) and “spellbinding” (The Scotsman).

Welsh tenor and ENO favourite Gwyn Hughes Jones, who “just gets better and better with every appearance” (theartsdesk.com) will sing the role of Walter.

American bass James Creswell, an “impressive” Sarastro (The Stage) in Simon McBurney’s ENO production of The Magic Flute will sing the role of Pogner. He will be joined by ENO Harewood Artist Nicky Spence as David and former ENO Young Singer Madeleine Shaw as Magdalene. Completing the cast is baritone David Stout as Kothner. He recently performed at the London Coliseum in the title role of Fiona Shaw’s The Marriage of Figaro.

2014/15 will be Edward Gardner’s final season as ENO Music Director. Described as a “natural and exciting Wagnerian” by The Guardian, Gardner was nominated for an Olivier Award for his 2012 performances of The Flying Dutchman. His performances of Otelloopened the ENO 2014/15 season in September, with the Daily Telegraph writing that “Edward Gardner’s conducting of his splendid orchestra was incandescent in its magnificence”. Gardner will return in June to conduct his final production as Music Director, The Queen of Spades.