Seventy years ago WNO mounted its first full scale production of Cavalleria Rusticana and I Pagliacci. It was fitting therefore to revive the most recent productions in this anniversary year, and invite Carlo Rizzi back to conduct after his long association both with the company and this particular staging. 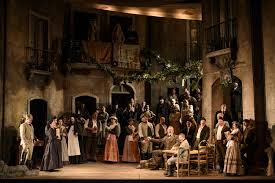 Today Elijah Moshinsky’s approach seems comfortably old-fashioned and lacking in provocation, but it does allow singers scope for individuality and the chorus to show their exemplary strengths. Camilla Roberts is a fine Santuzza, making much of the claustrophobic setting which hems her in and reacting impressively to the spite of the chorus. Her duet with Turiddu was one of the highlights of a fine evening and her final despair left us in no doubt that there was never going to be a happy ending. Anne-Marie Owens made a gentle Mama Lucia, for ever picking up the pieces.

If Meeta Raval’s knowing Nedda meets a far stickier end in I Pagliacci it is difficult not to think that she had it coming to her. Her brazen approach gave her a sharpness of character which helped to heighten the tension throughout, though Gyula Nagy, as her lover Silvio, seemed ill at ease throughout and was vocally restrained. 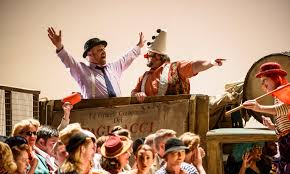 The key to both operas lay with the two male leads. David Kempster was an unusually authoritative Alfio, far richer than is often the case, which makes him a much more persuasive foil for Turridu. If he was suave as Alfio, the vitriol came to the fore as Tonio, though the prelude was sung with great bravura. Gwyn Hughes Jones was indisposed and Peter Auty took over at short notice – not that anybody would have noticed as he brings such beauty of line and sense of presence to everything he does. This was an outstanding performance by any standards.

Carlo Rizzi knows these score very well and brings an easy romanticism to them which never strains towards sentimentality or goes over the top.

This was the final night of the Welsh season – with two performances of In Parenthesis to come at Covent Garden in July. We can look forward to Macbeth opening in September – and the start of the next seventy years.