The weather may have taken a turn for the worse but there was no doubting the enthusiasm of Maidstone Symphony Orchestra who seemed to have retained all the warmth and joy of the summer, in an evening full of romantic extravagance.

Brian Wright opened with a thrilling reading of Dvorak’s Carnival Overture, the delicacy of the harp fending off the brashness of the brass and the thwack of the tambourine. Shostakovich’s Second Piano Concerto followed with Alexander Panfilov its vibrant soloist. He brought a highly percussive approach to the work which was both exciting and convincing, though he has all the subtlety for the familiar Andante slow movement. The fire he brought to his reading was mirrored in the Rachmaninov Prelude which he gave as an encore. We would happily have asked for more but that would not have been fair on him after the exertions of the concert. 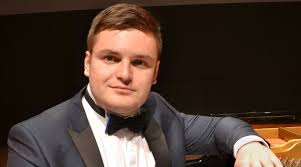 Berlioz’ Symphonie Fantastique is equally familiar and gained in authority as it progressed. There was sound dynamic contrast in the first two movements, with the two harps particularly impressive, but it was from the third movement that it really began to impress. From the offstage oboe to the sinister drum rolls at the end it was beautifully phrased in long, lingering paragraphs.

I don’t normally mention soloists by name but the two tympanists, William Burgess and George Barton, really stood out in the final movements. The March to the Scaffold had an intensity and power which came to fruition in the finale movement, where textures were crystal clear even in the density of Berlioz’ orchestration.

If the orchestra can maintain this level of musicality for the rest of the season we are in for a fantastic year. Tell your friends – there are still seats available!

The next concert which includes familiar works by Elgar, Bruch and Schumann is on Saturday 3 December.  mso.ticketsource.co.uk  [email protected]