Warm romantic music for a chilly winter’s evening. A very popular programme brought a large number to the Mote Hall, enhanced no doubt by the celebration of the 25th anniversary of the founding of the Heart of Kent Hospice.

Elgar’s Introduction and Allegro for Strings is indelibly linked for many of us to Ken Russell’s film for Monitor in 1962 and the boy on the white horse sweeping across the Malvern Hills. All of this came back in the richness of tone from the combined strings as they launched into the work, and then the sudden haunting delicacy of the solo viola. Have the strings ever sounded better? They certainly were on wonderful form and their new leader Andrew Pearson seems to have added a new enthusiasm to their playing. 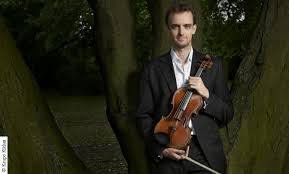 Bruch’s Violin Concerto (yes of course there is more than one but the first has a head start!) is still regularly at the top of Classic FM’s Hall of Fame but whereas many works can seemed jaded by regular repetition, the Bruch never seems to do so. Here again it had a freshness and immediacy which was compelling. Much of this was down to Benjamin Baker’s playing. Brian Wright has a wonderful knack of finding us young soloists on the cusp of international stardom, and surely here was another. Having recently won the First Prize at the Young Concert Artists Final Audition Awards in New York, he is due to give a series of major concerts across the USA next season. Sensing the unassuming authority he brings to the Bruch it is no wonder he won. There is nothing showy, no histrionics, simply the purest of music making and an immaculate sense of line and fluidity. The 1709 Tononi violin which he plays radiates the most beautiful tone, easily riding the full orchestra, and where appropriate seducing us with hushed, almost imperceptible phrasing.

It was a masterly performance but also served to show what a masterpiece the concerto itself is, standing up to any number of repeats, day after day.

As a well-deserved encore he played the Sarabande and Gigue from Bach’s solo violin Partita No2 BWV 1004 – as far removed from Bruch as one could imagine, and sublimely performed.

If Schumann’s Rhenish Symphony did not hit quite the same heights it was understandable, though there was much very fine playing and the horn section in particular impressed. Brian Wright takes a taught, muscular approach to the opening movement, almost hard edged at times, though avoiding any chance of sentimentality. The contrasting undulations of the second movement were well found as were the dancelike measures of the third. The change in atmosphere for the austere fourth movement impressed, allowing us to emerge into the sunlight for the finale, and the sparkle of the Rhine itself.

This season is proving to be exceptional. Let us hope there are as many in the hall in February for John Lill playing Beethoven for the President’s Concert.