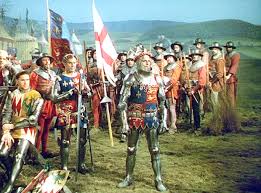 Film music is very popular but one has to admit that most of the current popularity is with American composers. Think film – think Star Wars, Harry Potter, Indiana Jones etc. But there was a time not so long ago when British film scores were among the best music being written.

This very popular concert – how good to see such a wide ranging audience – drew on the best British Film Scores of the last century, opening with Walton’s Spitfire Prelude and Fugue  and later the Charge and Battle from Henry V.  No excuse needs to be made for these thrilling pieces, and the triumphalist tone was continued with Arthur Bliss’ march from Things To Come and Eric Coates’ Dam Busters March.

Contrast was provided with Vaughan Williams’ Dawn Patrol which reflects his Pastoral Symphony and the more extrovert Prelude to 49th Parallel.

There is no doubt that Robert Farnon was a magnificent arranger and a fine composer in his own right but his score for the 1951 Hornblower  does not reflect the best of his work. The playful Polwheal is effective but the battle scene sounded entirely generic and the sentimental Lady Barbara overextended its welcome. The other disappointment was John Ireland’s The stampede for water from The Overlanders. Conductor Richard Balcombe, in his relaxed introductions, explained that this was a very late piece by Ireland and certainly does not reflect the quality of the rest of his opus.

The real delight of the afternoon came with two violin solos from John Bradbury, bringing us Ron Goodwin’s gentle Belle’s Love Theme from Beauty and the Beast and Nigel Hess’ more substantial Fantasia from  Ladies in Lavender. Both were exquisitely played with the integrity and charm John always brings to his solo work. There was no mention of these solos in the programme and, with no list of regular players, he does not have a biography either. Given his long-standing importance to the orchestra, particularly while there are a series of guest conductors, he surely deserves greater recognition.

The afternoon ended by reminding us, as if it were necessary, that it is almost Christmas, with Malcolm Arnold’s  Fantasia on Christmas Carols from the film The Holly and the Ivy. For such a fine piece I am surprised it is not performed more often and brought a very pleasing afternoon to a warm climax.

Next performance – though regulars will not need reminding – it the New Year’s Eve Concert on 31 December.