Carols and Christmas Music for Choir and Audience 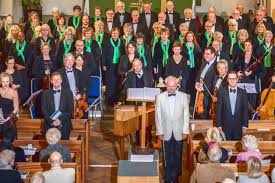 A larger audience than expected meant that some did not have the words for the carols – not that that seemed to deter our singing, and we were certainly in good voice to join with Bexhill Choral Society for their traditional Christmas Concert.

The unexpected item this year was a complete performance of Britten’s A Ceremony of Carols with its beautiful harp accompaniment – written originally for Osian Ellis in 1942 – played here with great musicality by Heather Wrighton. Britten’s score is certainly challenging in its tessitura, written originally for boys’ voices, but the choir attacked it with aplomb and were ably supported by soprano Claire Williamson. The opening and closing plainsong sections were particularly effective together with the positive impact of This little babe and the limpid delicacy of the harp interlude which lies at the heart of the work.

It was not quite ‘all downhill from here’ as Ken Roberts would have us believe for the opening O Come, O Come Emmanuel of the second half was most beautifully phrased and gently intoned. Before that we had heard Howard Goodall’s familiar setting of the 23rd Psalm – and how much better it sounds out of context! – and the Shepherd’s Farewell from Berlioz L’enfance du Christ, plus two arrangements from Ken Roberts himself; a Caribbean Christmas  for brass and wind, and a rousing rendition of Frosty the Snowman.

The second half brought Bob Chilcott’s charming Sparrows’ Carol and another arrangement by Leddington Wright, this time of See Amid the Winter’s Snow.

Many choirs have a dearth of male voices so it was particularly pleasing to hear the men alone in Holst’s arrangement of Personent Hodie.

The final items rolled gently down through Ding Dong Merrily and Little Donkey to Past Three O’clock – the only John Rutter in this year’s programme – to a Christmas Medley of four popular Christmas songs. Given the age range of the audience, most of us knew these – but I wonder for how much longer?!

The next event  will be Handel’s Messiah at the De La Warr Pavilion on Saturday 6 May 2017. www.bexhillchoral.org.uk