This performance was heralded as a Charity Concert in support of the High Sheriff of Kent’s charity Oasis, managing to combine an evening of wonderful music-making with support for an essential cause – working to end domestic violence and abuse.

The High Sheriff, Mrs Kathrin Smallwood, was present along with a clutch of worthies all wearing their respective chains and badges of office. I hope they enjoyed the event as much as the regular members of the audience for there was certainly a great deal to enjoy.

The evening opened with the overture to Smetana’s The Bartered Bride. This demonstrated the real strengths of the string section, starting as it does with the second violins and frequently drawing on them to lead. The fluidity and sense of close ensemble across the strings is now exceptionally high as this proved. 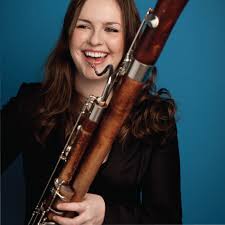 Amy Harman was the soloist for Mozart’s Bassoon Concerto K191 and gave us a gently mellifluous interpretation which sat comfortably across the lighter orchestration. Mozart only uses strings, horns and oboes, so that the deeper tones of the bassoon are allowed to flourish by themselves, producing a warm depth of tone in contrast to the brighter sounds of the accompaniment. In the final Rondo Mozart leaves the main theme for the soloist until the very end, concentrating instead on a heady cloud of ornamentation which Amy Harman brought off with both skill and charm.

It was a pity that – due to personal circumstances – she was not able to bring us the original second item, but in the event it was possibly our gain as we experienced one the finest renditions of Finlandia I have heard in many a year. The growling brass brought a sense of menace and fire to the opening and the tymps were splendidly aggressive throughout – much thanks to Keith Price. One could sense the swell of hatred towards the Russians as Finland sought its independence. The great final hymn came across as a sign of thanksgiving in anticipation – this was after all seventeen years before the independence whose anniversary is celebrated this year – and the finale was genuinely thrilling.

If the glories of Sibelius’ Second Symphony did not quite match the thrill of Finlandia it was certainly no reflection on the performance itself.

The opening of the first movement may still hark back to Tchaikovsky in its string writing but it soon moves towards a starker voice which we know is pure Sibelius. The biting woodwind and bleakness carry over into the second movement where the sun peeps out occasionally but is as soon lost to sight. It is not until the fury of the third movement that we feel there is some hope – a hope gloriously vindicated in the finale with its soaring flights of brass and a sense that dogged determination will win out in the end – as it did.

There is still one concert to go this season – Saturday 20 May 2017 with works by Mussorgsky, Dvorak and Tchaikovsky.