Aida lends itself to spectacle and the sort of vast theatricality of open air arenas, but at its heart is an intimate love triangle, and it is this reality which Phelim McDermott’s new production draws on. In many ways it is a very old-fashioned approach, the soloists often down-stage singing straight out, caught in a single follow-spot. When the scene opens out, Tom Pye’s settings are weighty and powerful but never specifically Egyptian, moving us away from the tourist view to an imagined world of ritual within which individual needs suffer. The two temple scenes are particularly impressive, the off-stage priestess here very much in view and the misty depths of Act 3 finely caught.

Within this world, the protagonists have more freedom than usual to find subtlety in the text. In this Latonia Moore is particularly impressive as Aida. The voice is large and at times genuinely thrilling, yet she is able to suggest the pain and inner sensitivity of the character. O patria mia was wonderfully expressive and the real joy of the final scene completely convincing. She was well partnered by Gwyn Hughes Jones in heroic voice throughout as Radames and looking the part of the Commander. His shock and capitulation in Act 3 was moving and completely convincing.

Michelle DeYoung seemed uncomfortable as Amneris and was the only soloist who seemed to have come in from another production. The voice was not fully focused at the start, though she was not helped by a costume that made her look like a cocoon. Where the rest of the cast were easily able to sing with dramatic impact directly to the audience, she appeared often to be giving a recital, and the final scene lost some of its impact because of her. It will be interesting to see if Dana Beth Miller later in the series has a more profound impact.

The rest of the cast were drawn from strength with Matthew Best an imposing King, Musa Ngqungwana a fierce Amonasro, and Robert Winslade Anderson – standing in at short notice – a particularly impressive Ramphis. The chorus were on superb form, sounding like double their number which often happens in Aida. The dancers/actors of Improbable were used tactfully across the evening, adding colourful choreography to the temple scenes and unexpected militarism to the triumph scene – which on this occasion became a celebration for dead heroes, and effective for being different to expectations. 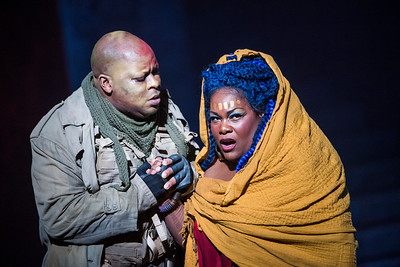 Keri-Lynn Wilson conducted with considerable panache, her sensitivity towards the introspective scenes particularly impressive, and her sense of the sweep of the narrative always under control.

This was a fine start to the new season and a number of new brooms in evidence. Let us hope it continues that way.