The new season is built around a series of concerti all of which will be performed by young professionals, often at the start of what we hope will be long careers.

For this first concert, Savitri Grier was the eloquent soloist for Mendelssohn’s ever popular violin concerto, finding a gentle melancholy in the opening passages but a real sense of bite in the cadenza and unexpected sweetness in the unfolding melody of the slow movement. Brian Wright’s approach to the work was more reflective than is often the case, with a greater sense of waltz rhythms in the slow movement and introspection in the first. Any shadows were however blown away with the sparkle of the fleet finale, hinting throughout at the other world of A Midsummer Night’s Dream. 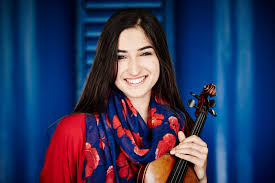 The concerto was sandwiched between two Russian masterpieces, opening with Shostakovich’s Festive Overture, a riot of colour and a tour de force for the brass. Written at great speed for the 37th anniversary of the Revolution, it is never quite clear how tongue in cheek it actually is – not that that affects our enjoyment.

After the interval we were presented with Rachmaninov’s Second Symphony. One of the problems with the popularity of the two central movements is that we rarely hear them in context, and the long unwinding of the first movement demands considerably more attention than either the Allegro molto or the Adagio. There is also the reality that the composer’s style and orchestration has been regularly high-jacked by the film industry to the point where the original can sound derivative. Thankfully the orchestra’s playing and the skilful direction from the podium kept us on our toes and alive to the every shifting patterns that Rachmaninov creates for us on what is a long and often complex journey, before the exhilaration of the finale.

The next concert is on Saturday 2 December when Olivier Stankiewicz will perform Strauss’ Oboe Concerto, together with works by Wagner and Vaughan Williams.