The Flying Dutchman overture – always a good warm up piece for both audience and orchestra – got us off to a strong start with its energetic opening. Brian Wright ensured that we enjoyed all that Wagnerian brass and busy string work and the slight roughness in the more exposed section didn’t matter much. 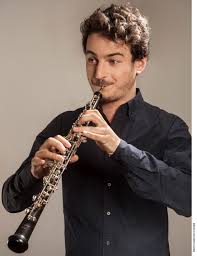 Then it was on to Strauss’s sparky, melodious 1946 Oboe Concerto. There’s an elfin quality about Olivier Stankiewicz, a Frenchman, both in his playing and his appearance. The mature Strauss understood exactly how to exploit the instrument whose small reed allows for few breaths and long phrases and Stankiewicz gave us a lot of lyricism and seamless creamy sound especially in the beautiful Andante. Brian Wright is, as ever, very good at supporting soloists and here he achieved an elegant balance between orchestra and oboe.

Ralph Vaughan Williams’s vibrant Second Symphony is an aural portrait of London hailing from just before the First World War. It’s a work of many moods and modes, requiring large forces and it’s good to see a battery of young percussionists playing, among many other things, several sorts of cymbal. By now the orchestra was totally in its stride and the precision of the muted strings beneath the horn and trumpet in the ethereal minor key melody in the Lento was a delight. So was the resolute string sound in the Nocturne. And the control in the very evocative epilogue, as everything dies away to silence at the end, was a great credit to the conductor.

Two other players deserve a special mention. Ben Knowles, principal viola, had a lot to do. Vaughan Williams loved the viola and gives it solo spots in his second symphony as well as leading more than once with the viola section. There’s a nice viola passage in the Strauss too. And it all came off with aplomb in this concert. Knowles well deserved the special front-of-stage acknowledgement Brian Wright gave him at the end. Second, full marks to the harpist, Jane Lister, who substituted at the eleventh hour for a player who had mistaken the date. She raced in with her harp five minutes before the concert was due to start and went on to do a grand job.

This was a charity concert attended by High Sheriff of Kent, George Jessel DL, in his ceremonial velvet and frills. It supported the High Sheriff’s charity the Royal Agricultural Benevolent Institution, which, he told the audience before the concert, looks after farmers and farming families who have fallen on hard times.