The Planets is the perfect piece for an accomplished youth orchestra such as LSSO. Its massive scale and orchestral colour means that there’s plenty for everyone to do and you can scale it up a bit to involve even more. After all, if you can muster four harps and six percussionists (including two outstanding tympanists and two sets of timps) then go for it. 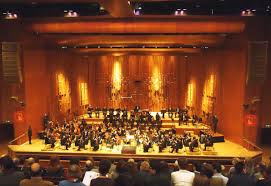 The initial 5/4 col legno rhythm in Mars took a few bars to settle but very soon warmed as Richard Armstrong  smiled and coaxed – clearly a man who’s comfortable with young players. The grandiloquent Jupiter passage with strings and horns was as rich as I’ve ever heard it and the dynamics of the tubular bells in Neptune were immaculately controlled. Then the LSSO choir produced a suitably magical, mystic sound at the end of Uranus. It was a fine performance by any standards and the presence of three cameramen on stage, one of whom was directing the others with gestures, didn’t seem to be putting anyone off.

The evening had begun with Bernstein’s cheerful, tuneful Candide overture which was played with professional panache and youthful enthusiasm – a powerful combination. The percussion opening isn’t for the fainthearted but in the hands of these competent, confident youngsters the concert got off to an upbeat start in every sense.

LSSO’s large forces were reduced to a chamber orchestra for Samuel Barber’s wistful, lyrical Knoxville: Summer of 1915 with Louise Adler, an LSSO alumna, as soloist. It gave the strings, in particular, the chance to play in a completely different style – including a delightful string quartet moment played by the four principals –  and Adler sang James Agee’s words with great beauty and smiling sadness.

The orchestra was excellently led by A level student, Samuel Woof-McColl. His grins and elfin qualities make him a charismatic player to watch and I’m sure we shall see and hear more of him.

LSSO is the most senior performance group at Centre for Young Musicians, London’s music service for talented young musicians which operates as an arm of Guildhall School of Music and Drama. Their discipline is striking – filing silently on to the stage in the right order to take their seats at the beginning for example.

Players are drawn from all over London and one of the things I admire about LSSO almost as much as the quality of the playing, is the diversity. Both the names in the programme and the faces on the platform tell a fabulous story of integration. The families of many of these youngsters have arrived in London at some point in the past from all over the world but here they are totally bonded by classical music. Anyone who worries about lack of diversity in professional orchestras should take hope form this. Some of these young people will undoubtedly be playing in “grown up” ensembles before long.