We may only have been a few yards from the English Channel but inside we were unmistakably in a night club in Buenos Aires – if a little more up-market than last year. Marcio da Silva is not afraid of taking risks with his audience and so we were plunged into a night of tango without introductions, translations or explanations – and it was riveting.

More than anything else, it was the power of Astor Piazzolla’s music which swept all before it. The Argentinian composer transformed the traditional approach to the tango, bringing in elements of jazz and classical music as well as a dramatic intensity in the individual songs. 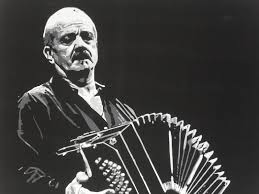 Mezzo-Soprano Alessandra Fasolo opened with Balada para un Loco setting the tone for the evening, passionate, forthright and demanding attention. If the voice was often edgy and tense this was absolutely in keeping with the settings themselves. Oblivion brought a little relaxation but also an air of melancholy, softened later by the sentimentality of Adios Nonino. The tension lightened in the second half with a near lullaby in Chiquilin de Bachin and the jolly Che tango che.

Marcio da Silva’s had chosen songs by Piazzolla for himself which were frequently powerful and angst-ridden. There were times when he seemed to be wrestling with the music stand to hold in the emotions generated by the musical lines. Los Pajaros Perdidos and Balada para mi muerte were particularly effective in the first half but he found a more reflective, conciliatory tone for El Gordo Triste and Jacinto Cicilana. The wistful setting of Velvo al Sur moved us gently into the instrument version of Oblivion which we had heard sung at the start of the evening.

The voices were accompanied throughout by Boyan Ivanov, clarinet, Elena Marigomez, double-bass, and Stephanie Gurga, piano, who provided a number of instrumental movements throughout the evening. Of these Libertango is probably the most familiar and it was quite right that they repeated this as an encore in an even more exciting and improvisational mode than they had earlier. In the first half they gave us Primavera – the double-bass providing the necessary percussion as well as string sounds – the gentle tones of Milonga del Angel bringing the first half to a close.

The evening ended with all involved in Maria de Buenos Aires from Piazzolla’s operetta of the same name – with Marcio this time on the maracas.

The event was exceptionally well received by a comfortably full house, as have been all the events so far this season.   It seems that risk taking is paying off!