This is the third revival of Phelim McDermott’s visually impressive staging of Philip Glass’ Satyagraha and it looks as if it will be as popular as it has been on both previous occasions. Toby Spence has taken over in the lead role as Ghandi and his calm, almost beatific presence, combined with great purity of musical line, raises the whole evening to new heights.

What struck me on this occasion was the way we as onlookers are forced ever more to concentrate on the music rather than the text. There was a time when, prior to any serious visit to the opera, one had to learn the libretto with care, to ensure understanding of the work which was inevitably sung in a foreign language. Then came surtitles and we relaxed, assuming that, no matter how little we knew beforehand, it would all make sense as it went along. With Philip Glass the reverse is true. The language used is not just foreign but in many cases unknown today to all but academics. Though we are given projections of key thoughts, the on-going narrative remains aloof, and all we have is the music to retain our attention.

All the stranger then that so much of the production centres on the written word and the impact of Indian Opinion. News, fake or otherwise, is essential to the non-violent cause, though we see it rather than hear it.

The large cast are as strong as previous presentations with Sarah Pring a formidable Mrs Alexander. Karen Kamensek returns to the pit and her orchestra is as light and clean textured as one could wish. There are moments when it seems to explode with light and enthusiasm. The chorus, who regularly carry the weight of the action, were in their usual excellent form – it is difficult not to take their professionalism for granted, so secure has it become.

There are times when the vast puppets and visuals now seem to have less impact than when originally experienced but the working relationship with Improbable  has proved to be a uniquely effective selling point for ENO in bringing in new audiences – and as such is very welcome. 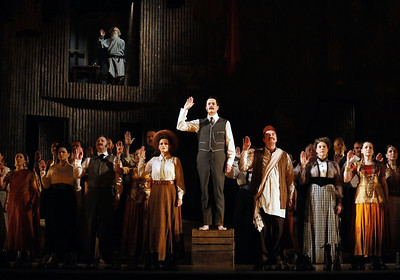