Marcio da Silva is a warmly arresting baritone and, for a first stab at Winterreise this was a commendable performance. Twenty four songs in Schubert’s cycle, with only a short interval after number 12, takes a lot of stamina. Only occasionally – in some of the bottom notes in Irrlicht for example – was there any sense of strain. High spots included Fruhlingstraum in which he and pianist Francis Rayner – an excellent accompanist –  emphasised the contrast of the major key passage (most of these songs are in minor keys, of course) and rippling 6/8 rhythm alternating with the stormy passages and wistful ones as the singer dreams of spring. 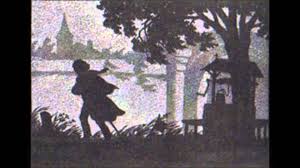 Die Post was fun too with Francis Rayner ensuring that we could all hear the smiling post horn references in the accompaniment, before the sadness well evoked by Marcio da Silva. They gave  a delightful rendering of Die Nebensonnen bringing out all the folksy nursery rhyme qualities of the piece.

Overall, they ensured that this plotless cycle evoked the singer’s journey as, jilted in love, he sets out, through the winter, to work out his own complex feelings. As always, one is left marvelling at Schubert’s extraordinary ingenuity and at the versatility this cycle demands of its performers.  Marcio da Silva’s was singing the cycle from memory – a feat in itself.

Before Winterreise we were treated to Aysen Ulucan playing, also with Francis Rayner, Beethoven’s violin sonata Opus 30 number 2. It was a workmanlike performance delivered with poise and nice negotiation of rhythmic contrasts, particularly in the C major section. Aysen Ulucan also gave us some very beautiful cantabile playing in the adagio. At other times the tone was a bit thin and the sound sometimes swallowed by the rather dry acoustic created by the spacious, lofty beauty of Christ Church. Occasionally there was harshness created by possibly misjudged bowing pressure too, but these are fairly minor gripes.

This concert took place on a bitterly cold, wet and windy evening. It is a credit to Hastings Philharmonic that so many people turned out for what, in the event, was a musically demanding concert for all concerned.