Isabeau is a strange, rather clunky piece and it was completely new to me. Think Spamalot meets The Merchant of Venice with a seasoning of The Emperor’s New Clothes which finally morphs into Lear or Oedipus. And with characters with names such as Ethelberto of Argyle and Randolf of Dublin it’s the sort of thing which provides ammunition for opera sceptics who want to ridicule the entire art form. It isn’t hard to see why Isabeau has more or less disappeared from the repertoire in the last 80 years or so although it enjoyed a fair amount of ongoing success following its 1911 Buenos Aires premiere. 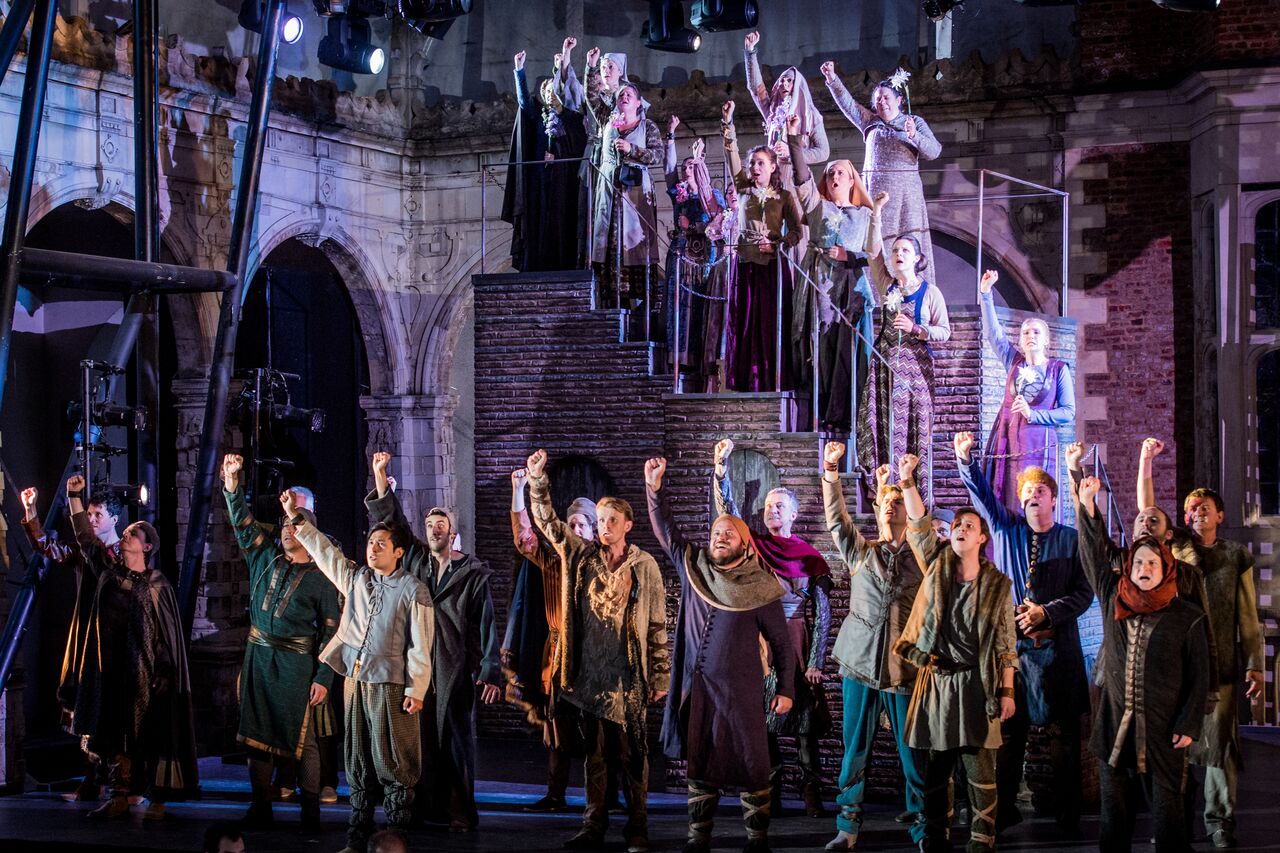 Virginal Princess Isabeau i(Anne Sophie Duprels) is told by her tyrannical father (Mikhail Svetlov) the King that she must choose a husband from one of a series of competitors for her hand. She doesn’t fancy any of them, so her furious father says she must ride naked through the streets as a punishment. Citizens are forbidden, on pain of blinding, to look. Meanwhile a jolly falconer, Folco (David Butt Philip) has turned up – with lovely silver falcon puppet. He and Isabeau fall in love. He looks at her nakedness. He is blinded. They die. Yes the plot – or “book” as we would say if this were a musical – is utter tosh, however hard the production tries to find topical resonances relating to feminism, appearance and all the rest of it.

On the other hand Pietro Mascagni’s score is full of delightful orchestral colour every nuance of which is allowed to sing out under Francesco Cilluffo’s energetic baton. Isabeau gets a passionate aria in Act 1 in which she pleads with her father and each of her sustained notes is accompanied by shifting cadences beneath it. At one point the horns have a very dramatic and unusual repeated figure in which a very short note is followed by a stressed longer one. There’s interesting music for the harp and sometimes for percussion although the wood block for the horse’s hooves put me irreverently in mind of Monty Python. 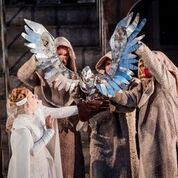 There are some fine performances on stage here too. As a woman cheated of just about everything, Duprels uses her soaring top notes movingly to communicate passion and tragedy. Butt Philip’s tenor is warm and convincing especially when he is effectively in duet with the cellos. The piece finally becomes dramatically coherent in the last act when Isabeau visits Folco’s prison cell. Their duet work here is nicely balanced and judged in this production and you actually begin to believe in them.

Full marks to Opera Holland Park’s usual large, young chorus too. Chorus Master, David Todd, has done a fine job in making them sound really vibrant as they swarm over the set designed by takis.

There are problems with the set, however. It looks great with lots of steps, ledges and platforms on three moveable, interlocking “islands” presenting different configurations to connote a medieval castle. It’s visually a strong idea and it works especially well during Isabeau’s naked ride which takes place upstage behind the continuously shifting “castle” so that the audience gets the merest hint. The trouble is that these bits of castle are clearly very heavy and the cast and crew often struggle to start them rolling. And there’s a stage left chamber (a bit like a giant version of a disability lavatory on a modern train) whose big semi-circular door refused to budge on press night leaving cast members invisible to the audience who palpably resisted cheering when a stage hand, dressed as a churl, finally freed it, several minutes later. A case of a potentially good design whose practical problems have not been fully thought through? Let’s hope they sort it for the rest of the run.