A WSO concert rarity. Music all by composers who wore wigs. An occasion which surely demanded the musicians dress likewise! But rather than the theatre, sobriety called. It was to be a day of WSO history in the making. In sound. Tireless Turkish doyen of the piano Idil Biret, at 76, chose WSO, John Gibbons and their home stadium for the recording of the next pair of her career journey into the Piano Concertos of Mozart for the Naxos CD label. 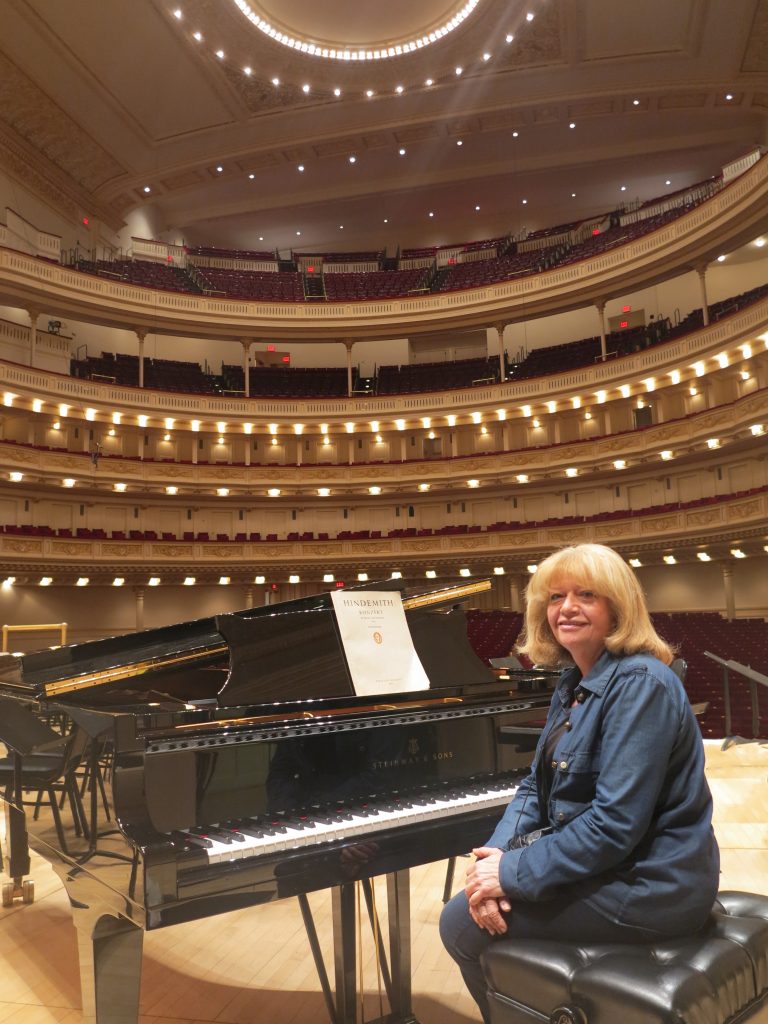 In making their commercial recording debut on Sunday, WSO partnered Biret – hugely decorated internationally and the globe’s most-recorded pianist – into extending her gigantic recording legacy to 63 concertos. After her distinguished account of so many post-1800 piano compositional greats, several in live concert recordings, she has now gone back, in period, to Mozart.

Including Sunday, she has now recorded eight of his 27. Last year she added Nos 15 and 24 with John Gibbons joining the project and conducting the London Mozart Players at St John’s Smith Square in London. Her Nos 9 and 20 were also live, in Sydney, Australia, and Wurttemburg, Germany.

Biret is such a regular at Worthing that the Assembly Hall soloist’s dressing room on her visits sprouts Turkish drapes and lamps from the ceiling, rugs from the floor, and the purest authentic Turkish Delight from the refreshments fridge. Next time, before she plays whatever concerto, bookmakers’ odds are shortening that the parts for Mozart’s Overture to The Abduction from the Harem, with their Turkish percussion, will magically appear on the orchestra’s desks from a large puff of smoke generated by the raising of Gibbons’ baton.

Biret knows the orchestra, the acoustic, the audience, and she admires Gibbons’ flexible qualities. All involved on Sunday faced a marathon of preliminary rehearsing, recorded rehearsal takes, the live concert itself recorded, and, after the listening crowd had gone home, the plastic surgery re-takes to cover over any unacceptable flaws from the live performance. All except the concert itself was done behind closed Assembly Hall doors on the one day only.

To record an hour’s music with no previous orchestra rehearsal is the white-knuckle way the WSO and Gibbons execute their normal concerts, which results in quality one would deem miraculous were it not for the WSO’s comprising world-cream London and South East musicians with a readiness and willingness to tackle anything under a conductor they, too, have much time for – and travel mileage.

Principal violin Julian Leaper told me before the live concert that although the WSO is a contracted orchestra and not an employed one, 80% of the band are effectively ‘permanent’ and together felt a real pride in being about to make it onto disc as WSO. Of course, as recording orchestral musicians, WSO members, if anonymously (a disadvantage of their trade), have been on many famed recordings of concert hall repertoire and film soundtracks, including the Spielberg/Williams blockbusters.

Such will have increased Biret’s confidence and conviction in her decision to take WSO into their recording debut. Furthermore, leader Leaper informed me that he and fellow first-fiddles man Julian Trafford played in the English Chamber Orchestra in their lauded Mozart Concerto recordings with Murray Perahia and Mitsuko Uchida.

Worthing’s resident Steinway piano was unsuitable for the job in hand, however. My received information is that its quite recent upper re-stringing requires many more manual tunings before attaining optimal tuning stability. To require several such tunings during the day would waste time and disrupt.

Japanese makers Kawai therefore jumped at the chance to provide a substitute with the only available British example of their newly-developed Shigeru series Concert Grand – which emerges worldwide at a rate of only 20 a year, and which at £125,000 is intended to rival world-elite pianos Steinway, Bosendorfer, Fazioli and Yamaha’s CFX.

The Shigeru’s evenness of presence and tone across its keyboard length, and thus its expressive potential, was evident in the performance. Kawai delivered the instrument to Worthing and thus virtually sponsored the live recorded concert.

The day had begun early for the orchestra and recording crew, but maybe not as stressfully as for Maxwell Spiers. He was called up at 7am to be told that WSO principal oboist Chris O’Neil’s replacement Louise Hayter had fallen ill. Would he get dressed and get down here? He would? Right, so all was now ready.

Well might have Spiers been mopping his brow after his rush but then he discovered the altered playing order of music meant his big moment came right at the start. The Arrival of The Queen of Sheba features the two oboes in busy duetting fanfares. Its ending brought real mopping of the Spiers brow and he admitted: “Yes, that piece is a real blow [challenge]! We are playing in nearly every bar because Handel has us playing the first violins part in the bits between our solos.”

Biret may be from Ankara, but if her first concerto of the day as the celebrated soloist was announced by The Arrival of the Queen of Sheba, what’s a few hundred miles across mountains and semi-desert?

William Boyce made probably his WSO debut when British music nut John Gibbons unfailingly seized the rare chance to crack open one of his short but distinctive eight baroque symphonies as a limbering-up for making a recording of other late 18th Century music. And a splendid choice it was, too, when it opened the second half of the concert. Boyce being the Master Of The King’s Music, it’s actual composition was to mark the birthday of George II.

Boyce bridges an historical musical gap between Purcell and Elgar, and is buried beneath the dome of St Paul’s Cathedral.

Ahead of this intended CD of Mozart’s 25th and 27th Piano Concertos seeing the light of day, I ought properly to say nothing of the performance. But with the occasion’s music choices – all but the sublime Bb Concerto creating a real sense of celebration – I’ll say one thing. Having listened to WSO since a boy it was a thrill to hear the magnificent orchestra-only introduction to the C Major Concerto build and build, knowing what we heard now might be heard far and wide in years to come. Mozart had just conquered Vienna on his three main fronts of opera, symphony and concerto, and now here were WSO having a big moment of their own.

And when Biret made her first piano entry . . . ah, that would be telling.

Handel, The Arrival of The Queen of Sheba from the oratorio Solomon (oboists, Maxwell Spiers, Rachel Ingleton)

Boyce, Symphony No 2 in A (Ode for the King’s Birthday)