You need to be at least middle-aged to recall the last production of Porgy & Bess staged in this country – Glyndebourne’s production under Simon Rattle, remounted later at the ROH – so it is all the more welcome now. That director James Robinson’s approach often raises as many questions as it solves is not to underestimate the achievement here, if nothing else the overwhelming impact of the score and the quality of singing. 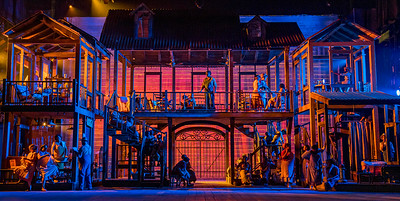 It is easy to overlook the fact that this is essentially a choral work and the chorus which ENO has assembled are superb. The funeral scene, the great storm, the final chorus are stunningly effective and powerful while maintaining a sense of a genuine community coming together. The large number of solo parts are also pleasingly apt without any obvious caricaturing or stereotypes.

John Wilson whips his orchestra into a heady jazz idiom while maintaining the genuine operatic basis of Gershwin’s score, and it is this cross-over which is so well handled. All the soloists have operatic voices which are more than capable of filling the large spaces of the Coliseum. Nmon Ford’s Crown impresses from the start and is dangerously powerful throughout. If Eric Greene’s Porgy is more than a match for him it is partly because he is unusually athletic. While his left leg is badly deformed and he needs a crutch to move about, he does so swiftly and with apparent ease. This is one of a number of choices which sit uncomfortably with the text. Why is he a beggar when he appears to be as active as many of the other men and could surely hold down some sort of job? Or am I simply seeing it in terms of our current approach to those on benefits?!

Nicole Cabell’s Bess is a far more complex character – an obvious addict and, possibly because of this, showing very little personal strength. She is an outsider while Crown’s mistress, but is accepted into Catfish Row when she takes over Clara’s baby. Yet she returns to Crown all too easily and slopes off with Sporting Life at the end.

At the heart of the work her duet with Porgy, Bess you is my woman now is the key to the evening, and John Wilson slows the tempo to allow us to indulge in their one really happy moment. 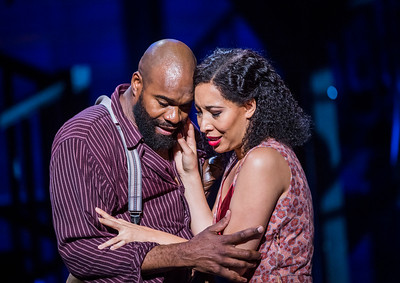 Frederick Ballentine is a disturbing Sporting Life, seemingly allowed to lurk on the fringes of society, occasionally berated by the women but tolerated even though he is a real danger. That the chorus all seemed so happy to join in with It ain’t necessarily so was another moment of tension given the strong faith they all seem to have across the rest of the work.

Nadine Benjamin’s Clara and Latonia Moore’s Serena were warmly and glowingly sung, their presence underpinning the ongoing life of the community.

The design work by Michael Yeargan was something of a double-edged sword. The vast skeletal building, on its even larger revolve, provided a sense of community and of life taking place all the time in the individual rooms, but the lack of walls made it difficult to understand the ghetto-like sense of claustrophobia the community endures or a real sense of poverty. The upper floors had large fans in the ceilings – could they really afford this?

But these are minor quibbles for a production which brings ENO back into focus for quality production values as well as outstanding music.