Middle Temple Hall – in all its Elizabethan glory with carving and stained glass – is a stunningly beautiful concert venue. It was, apparently the venue in which Twelfth Night was premiered (earliest known performance, anyway) in 1602 so it’s rather delightful that the tradition continues. 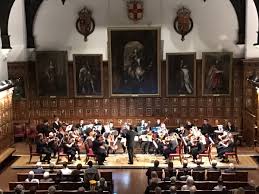 This concert opened with a world premiere of Windows by Misha Mullov-Abbado. I’m not sure how fair it is to point out that he’s the son of Viktoria Mullova and Claudio Abbado but he is, obviously and literally, a born musician. This work in three unrelated movements (written originally as standalones) is unexpectedly tonal and lyrical as well as, at times, jazzy and lilting. The first movement is almost lush in places with some fine, very exposed string work. I also admired the quality of the trombone playing over lots of well controlled vamping in the middle syncopated movement.

And then it was Schubert’s Eighth Symphony. Outcry Ensemble claims to approach modern music with the passion and rigour you’d expect to experience when hearing mainstream repertoire and to apply the explorative-analytical approach normally required for contemporary music when they play standard repertoire. And in this work you could hear exactly that from the dramatic dynamics to the well pointed general pauses which made it feel very crisp and fresh. In the andante Henshaw balanced the sonority with the alternating lightness, and the percussive pizzicato came through with notable precision. Yes, there was an occasional wrong note but that’s the joy of live performance.

The acoustic of Middle Temple Hall is perfect for Schubert. It worked much less well for the Brahms Violin Concerto. In the opening and closing movements the orchestra was often too loud so that accomplished soloist Oscar Perks seemed almost competing aurally and losing. Henshaw really should have been aware of this and damped his orchestra down. The gentler passages and the whole of the middle movement worked well though and it was a real treat to hear Perks play his own cadenza which explored the themes of the first movement with imaginative virtuosity.