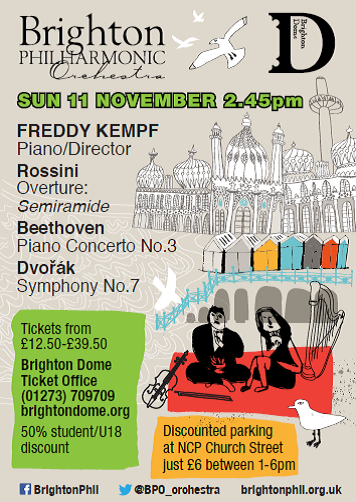 The Brighton Phil is delighted to welcome international pianist Freddy Kempf to Brighton Dome for the second concert in their 2018/19 season, for a programme of music by Rossini, Beethoven and Dvo?ák.

The concert opens with the overture to Rossini’s opera Semiramide, of which the orchestra’s Artistic Administrator Ian Brignall says: “This is full of tunes, it’s an orchestral showcase – everybody will be smiling at the end of this.” Conductor Freddy Kempf agrees: “The opera is not so well known but I think everyone will recognise the overture. It’s been used in many Hollywood films, so people will definitely recognise the melodies. And as is typical with Rossini, although it’s not the most intricate writing, yet it’s so effective. It will really set the scene for the concert.”

Then Freddy will perform Beethoven’s dramatic Piano Concerto No.3 whilst directing the orchestra from the keyboard. This is a real favourite of his: “I love the Romanticism in the slow movement. I feel that he’s written it almost as an improvisation because there are a lot of incomplete things in the score, so I’m trying to improvise a little bit. And the fact that there isn’t a conductor there makes it a little easier for us because a lot of the time the orchestral players can pretty much sense what the soloist is doing and this way I don’t have to communicate that to a conductor to sort of reinforce that to the orchestra, so it should work really well. I remember when I was a lot younger and learning pieces for the first time I loved the Emperor [piano concerto] probably the most and now that I’ve played them all, now more and more I tend to love this third piano concerto.”

The concert closes with Dvo?ák’s Seventh Symphony which Freddy is looking forward to conducting: “This is probably my favourite Dvo?ák symphony and I’m really delighted to be able to do it in this concert. I love the way he incorporates so many folk melodies and folk rhythms, especially dances. I want to bring out what the strings can do, but I also want to concentrate on that dance aspect. I feel emotionally very close to Dvo?ák even though he didn’t write a mature piano concerto, and he didn’t really write anything for solo piano, he just used it in chamber music, so it’s a great way for me to experience Dvo?ák.”