Tanya McCallin’s sepulchral design is a fitting visual complement to David McVicar’s often stark and unromantic approach to a work which can too easily be sentimentalised. We are aware of death from the start and never allowed to forget the inevitable outcome of events. When this is added to an early nineteenth century moral straight-jacket there can be little hope for any of the protagonists. No matter how sorry they may feel for past action there is no way they can escape and it seems that even faith in the mercy of God is no match for the failure of society to forgive. As such it is one of the finest approaches to La Traviata I can recall, and this WNO revival is remarkably strongly cast in all areas. 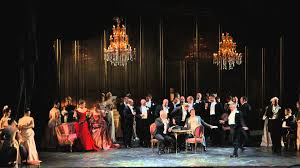 The chorus are as strong as one could ask for, and carefully individualised in the two party scenes. Smaller parts, particularly James Cleverton’s Baron and Rebecca Afonwy-Jones’ Flora, are incisively characterised to create a naturalistic, if at times over indulgent, world within which events unfold.

Kang Wang’s Alfredo is very much the outsider here. His baritonal warmth, with no difficulty in the higher register, creates a deeply human if naïve young man. The fact that his costume never quite seems to fit was telling – he is growing in to his adulthood and making mistakes along the way. The fact that these mistakes become literally fatal is what turns the narrative into real tragedy. Roland Wood is finely sensitive as Giorgio Germont.  His changes of attitude are convincingly naturalistic and his relationship with Violetta is marked by his body-language as well as his voice. 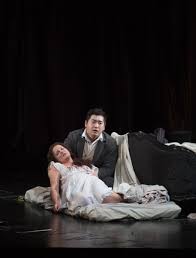 Anush Hovhannisyan is magnificent as Violetta. Not a cough in sight but a body wracked with pain and a gradual, if inevitable, sense of collapse. The final act is deeply moving in her intense vulnerability, never able to do more than crawl and yet fighting all the time to live.

James Southall’s conducting allows the larger than life melodies to flow unhindered but concentrates on the moments of intimacy for internal detail.

This is a production that deserves to be revived frequently and hopefully seen more widely.