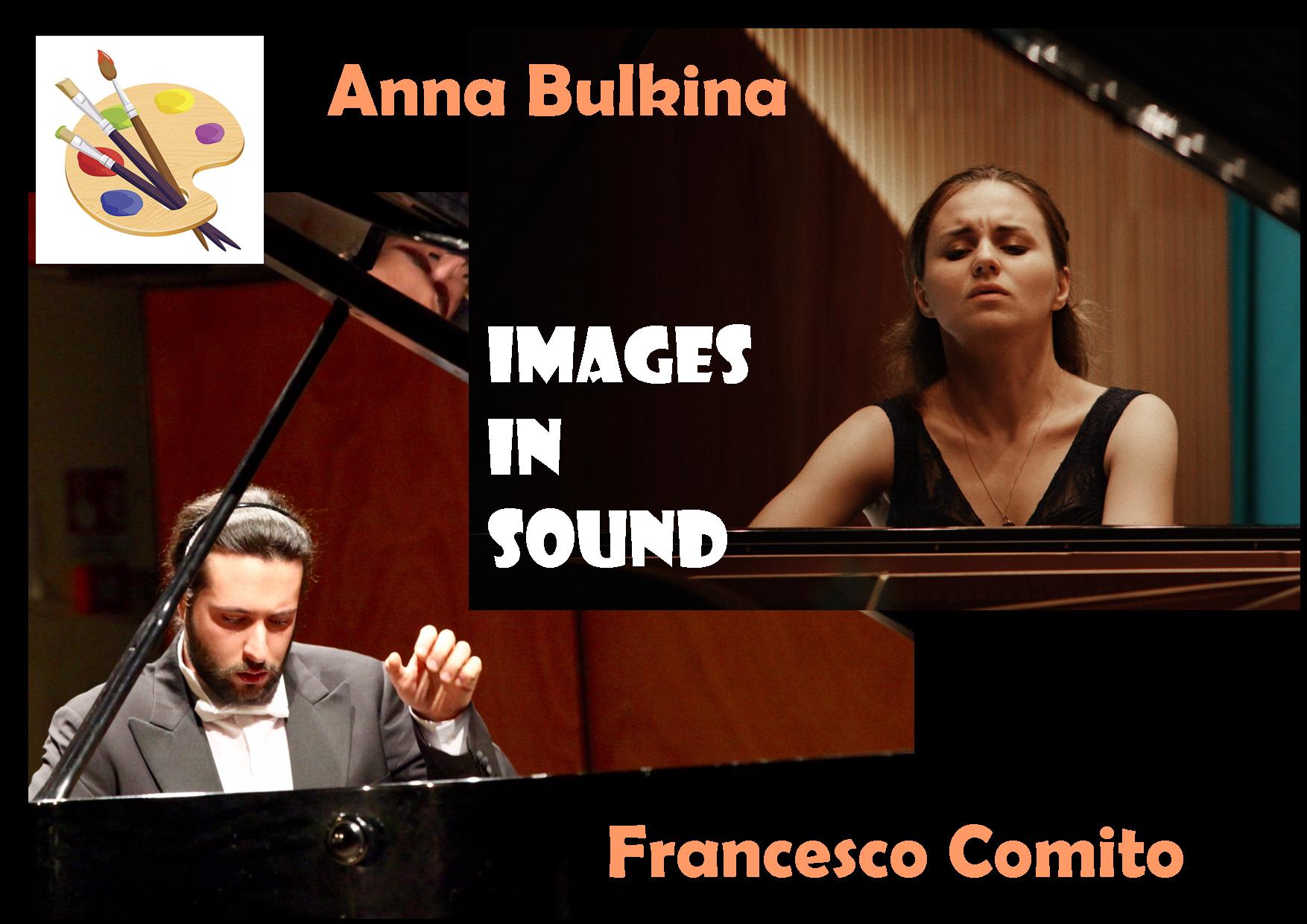 Painters’ easels link arms with the grand piano to interpret together great Russian pictorial music.  Three artists will paint new work to the inspiration of a pianist performing live, to create a fascinating next International Interview Concert on Sunday July 7.

When pianists Anna Bulkina (Russia) and Francesco Comito (Italy) bring their rare ‘Images in Sound’ concert of simultaneous music and painting, St Paul’s Worthing will become an enlarged (though tidier!) art studio. The audience will sit in the Interview Concerts’ signature layout In The Round, guaranteeing a close-up, connective experience for everyone, and an intimate mutual sharing.

Anna and Francesco’s choice of music ensures a brilliantly evocative atmosphere for creativity: two suites for solo piano – Mussorgsky’s famous ‘Pictures at an Exhibition’ and Rachmaninov’s kaleidoscopic ‘Études-Tableaux Opus39’. It won’t be revealed until the concert who will play which, but when the painters show their individual results at the end of each piece, and all participants are interviewed, the audience will witness three additional responses to the music.

Modest Mussorgsky visits the posthumous exhibition of his friend Viktor Hartmann and places the listener in front of 10 named pictures. They are of buildings, places, objects, creatures, legends, women and children in Russian, Polish and French culture – including The Gnome, The Old Castle, Baba Yaga and Kiev’s Great Gate of Heroes. Many lovers of ‘Pictures at an Exhibition’ trace their introduction back to rock progressives Emerson Lake & Palmer’s vigorous and daring 1971 version.

Contrastingly, Sergei Rachmaninov names none of his nine ‘picture studies’. He was reacting to visual stimuli but he wanted the audience ‘to paint their own pictures’ of what they sounded like. Down the decades, popular thought relates two to seascapes and one to the story (and demise) of Little Red Riding Hood.

To hear a Russian pianist performing something as synonymous as this of their own musical heritage is a compelling prospect. That, of course, will be Anna, from Rostov, who at the keys displays a striking, deep intensity and involvement. Yet Francesco is an Italian with an affinity and empathy for things Russian, which will work illuminatingly alongside his sensitive and passionate native temperament.

Pianists lacking the technical ability do not risk performing these two hugely demanding suites, and those who safely do would hesitate to attempt both in the same programme.

Neither will the painters be revealed until the day. They will include established talents and newcomers but to know their styles in advance would make the event predictable. That is something the Interview Concerts are not.

Meeting the musicians and artists in conversation about themselves and their work could never be – and audience questions are included – but things unexpected and interactive concerning the music is also what the audiences come for.

Anna and Francesco will arrive direct from the Moscow Tchaikovsky Piano Competition and The Interview Concerts education initiative, with Worthing Community Chest funding, will be taking them into three Worthing primary schools to give their presentation of music and fairy tales.

Seating for ‘Images in Sound’ is unreserved, doors open at 3.30pm. The artists’ work will be on display and for sale, as will Anna Bulkina’s CD ‘Suggestions’. Tickets are available in person (cash only) at ‘Henry House’ and ‘Anchored in Worthing’, on online at seetickets.com